Dickens: His Work and His World (Hardcover) 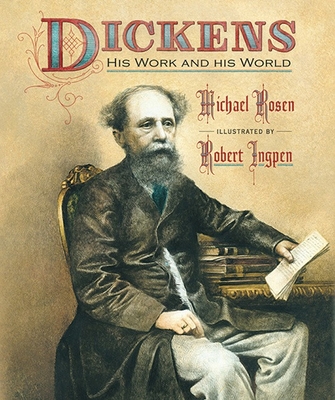 "The worlds of Charles Dickens, both his personal one and the ones he created, come alive in this terrific book, which will entice readers to his works." — Booklist (starred review)

Join award-winning author, critic, and anthologist Michael Rosen for a spirited tour of the life and work of one of our greatest novelists. With stunning illustrations by Robert Ingpen, this accessible, child-friendly book vividly re-creates the world of Charles Dickens, from the author's childhood in London to his early career, his performances, and, of course, the great social and political upheavals of the time, which inspired so much of his work. Michael Rosen's vibrant discussion covers some of the best-known novels by Dickens, describing Oliver Twist, A Christmas Carol, and David Copperfield, and providing a fascinating detailed analysis of Great Expectations. Back matter includes a time line and an index.

Michael Rosen is an award-winning author and anthologist of books for young readers, including Shakespeare: His Work and His World, illustrated by Robert Ingpen. In 1997 he received the Eleanor Farjeon Award for service to children's literature. Michael Rosen lives in London.

Robert Ingpen has published more than one hundred acclaimed books, including Shakespeare: His Work and His World by Michael Rosen. In 1986 he was awarded the highest international accolade for his body of work in illustration, the Hans Christian Andersen Medal. Robert Ingpen lives in Victoria, Australia.

This title has merit for elucidating some of the literary devices for which Dickens is known. It will be a welcome addition to libraries looking for new ways to promote the classics.
—School Library Journal (starred review)

The worlds of Charles Dickens, both his personal one and the ones he created, come alive in this terrific book, which will entice readers to his works.
—Booklist (starred review)