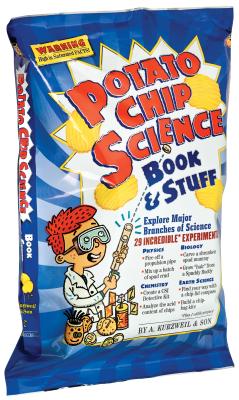 You won’t believe what you can learn from a potato chip!

There’s a new branch of science in town—Potato Chip Science—a grab-bag of nourishing lessons in everything from physics to forensics, from navigation to neuroscience.
Packaged up in actual potato chip bag is an experimental world cooked up for kids who like science, and snacks, and snacking on science. Filled with whole brain goodness, this kit features 29 different snacktivities based entirely on the planet’s most miraculous munchies. We bet you can’t try just one!

You won’t believe what’s in the bag!

Allen Kurzweil is the author of Leon and the Champion Chip—the second in a series of young-reader novels—in which he first explored the idea of a science curriculum based on the potato chip. Mr. Kurzweil has also written two award-winning novels for adults, A Case of Curiosities and The Grand Complication. Currently a fellow at the John Nicholas Brown Center for the Study of American Civilization at Brown University, he lives in Providence, Rhode Island, with his wife and son, Max, his potato chip science collaborator and beta-tester.

“A new wrinkle – or should it be crinkle? – on the kitchen-table science fair.” - Buffalonews.com

"A hit with booksellers." - Publishers Weekly

"Perfect for kids. (I would have gone nuts for this as a child! And who am I kidding? I’m in my twenties and I still think it’s pretty cool!)” - EW.com

“A fantastic book of science experiments for kids to do with their parents. It's terrifically designed, and filled with fun facts and puns and silliness. Super fun!" - Goodreads.com

“Holy potato chips! Batman. There's something about the crinkle of a bag of chips that is like a geek siren song.” - ThinkGeek.com

“If you have a wee one with an interest in science... check out Kurzweil’s latest project, the science kit in a potato chip bag.” - Techcrunch.com

“Got a kid who loves science? What about potato chips? Check out Potato Chip Science -- a grab bag of lessons on everything from physics to forensics, from navigation to neuroscience.” - Idaho Statesman

“Potato Chip Science makes experiments tasty for children. Most kids do not need much motivation to tear into a bag of chips. So why not come up with a way to take that natural tendency and use it to expand a child's mind more than his or her waistline?" - Tulsa World

“There’s a science-deficit among America’s young and one man’s cure comes packed in a potato chip bag.” - CBS-TV (Philadelphia)

"An irresistibly introduction to the tasty side of science.” - Mindware.com

“School’s in session, which means—deep breaths, parents—science fairs are just around the corner. Get kids motivated early and find some simple-to-implement, innovative ideas with Potato Chip Science” - Time Out, Chicago, IL

“Kids will get a recommended dose of fun with their lessons in physics, biology, chemistry and earth science that is, as the packaging says, ‘High in saturated facts.’” - L.A. Parent

“A new wrinkle – or should it be crinkle? – on the kitchen-table science fair.” - Buffalonews.com