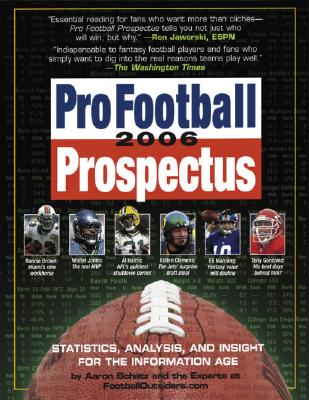 By Aaron Schatz
Email or call for price
Out of Print

Drawn from the groundbreaking intelligence at FootballOutsiders.com, the braintrust that, according to Salon.com, picked more correct playoff teams in the last two years than any other group of experts, here is the essential annual that features:

• Pioneering team and player ratings that correct for situation and opponent to reveal true contributions to success.

• Unique statistical toolbox and game charting data (unavailable in standard NFL stats) such as which receivers run the longest patterns on both complete and incomplete passes; which quarterbacks benefit the most from yards after catch; which teams most often blitz or run specific offensive formations; and which defensive backs stop the other team’s passing game, measuring pass coverage rather than just tackles.

• Exclusive 2006 Predictions and odds on each team as a Super Bowl contender…or a contender for the top pick in the 2007 draft.

• In-depth essays on blitzing effectiveness, which coaches are most aggressive on fourth downs, how playoff workload affects a running back’s career, forecasting fantasy team defense numbers as accurately as those for offensive players, and a revolutionary new method for projecting young quarterbacks based on college statistics.

Aaron Schatz founded FootballOutsiders.com. He is a regular contributor to Foxsports.com and covers NFL for the New York Sun. He also writes for The New York Times, the Boston Globe, and The New Republic Online. He lives in Framingham, Massachusetts. Other members of the Football Outsiders include: Russell Levine, a football writer who lives in northern New Jersey; Chicago-based Michael David Smith who writes for The New Republic Online and the New York Sun; Michael Tanier, a sportswriter who lives in southern New Jersey; and Will Carroll, an award-winning columnist for Baseball Prospectus.

“Essential reading for fans who want more than clichés—Pro Football Prospectus tells you not just who will win, but why.”
—Ron Jaworski, ESPN