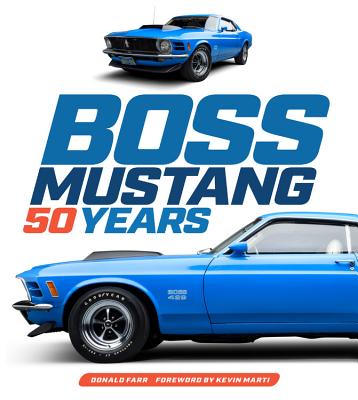 The Ford Boss Mustang is the most iconic pony car ever created, and this book covers it more extensively than any other. Boss Mustang: 50 Years—a fully expanded version of Mustang Boss 302—includes the complete history of its creation; racing and street histories of both the 302 and 429 models; and photos and interviews with Boss Mustang designers, engineers, racers, and more.

Of all the legendary names in the history of the Ford Mustang, one stands apart: Boss. Originally created to homologate the new Boss 302 engine and option package for SCCA Trans-Am racing, the Mustang Boss 302 debuted for the 1969 model year and was built in limited numbers for the street through 1970. This book features never-before-seen production and racing photography, interviews with designers and engineers, and keen insight from author Donald Farr, a renowned Ford historian and Ford hall-of-fame inductee.

Designed by the legendary Larry Shinoda, the Boss cars were easily distinguished from their less potent stablemates by their race-bred powerplant, standard front spoiler, and bold graphics. In 2012, Ford at long last revived this most revered of all Mustang models. With a new racing counterpart and a modern street version that delivers more than 440 horsepower, the Boss was truly back! In 2013, Ford rolled out the Boss one more time.

In Boss Mustang: 50 Years, Mustang historian Donald Farr offers a complete history of the car—from its late 1960s origins in Ford's boardrooms through its Trans-Am successes and untimely demise in 1970, up to the conception and development of the spectacular, limited-edition 2012 and 2013 Boss Mustangs. Packed with brilliant photography and firsthand accounts from the people who created the original Boss, as well as the team that resurrected Ford's most iconic Mustang for the 21st century, this is the story every Mustang enthusiast has been waiting to read.

As editor of the Mustang Club of America’s Mustang Times magazine, Donald Farr has been researching and writing about Mustangs for over 40 years. In addition to his magazine work, Farr has authored many books, including Ford Mustang: America’s Favorite Pony Car, Mustang Boss 302: Ford’s Trans-Am Pony Car, Legendary Ford and Mercury Muscle Cars, and co-wrote How to Restore Your Mustang and the Mustang Recognition Guide. Farr was inducted into the Mustang Hall of Fame in 2012.

An unsuccessful search for a Cougar Eliminator stripe kit inspired Kevin Marti to track down the original tooling at Ford and obtain permission to reproduce them. By 1983, Kevin was reproducing decals and other restoration parts for Mustangs and other Fords, which convinced him to leave his day job as a mechanical engineer to start Marti Auto Works. Thanks to Kevin’s relationship with Ford Licensing, in 1998 Marti Auto Works acquired Ford’s production database for 1967 and later vehicles. Combining his knowledge of computer programming with Ford’s decoding information, Kevin created a program to organize the raw data into today’s coveted Marti Reports that document vehicle originality while also providing production numbers, build date, factory options, selling dealer, etc. Kevin has also published three data-related books, including Mustang…By the Numbers.

For the Boss 302 fan, the book has many strengths. The period photographs of preproduction vehicles, development cars and race cars are beautifully reproduced, and compliment the text very well
- Forbes.com