A Mission to the Medieval Middle East: The Travels of Bertrandon de la Brocquière to Jerusalem and Constantinople (Paperback) 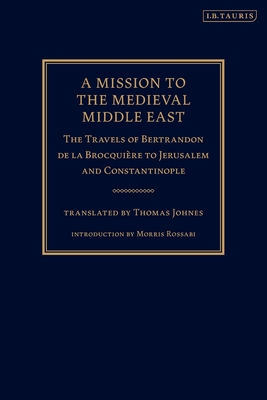 By Bertrandon de la Brocquière, Morris Rossabi (Introduction by), Thomas Johnes (Translator)
$39.95
Not on our shelves at the moment, but we will order it for you.

Bertrandon de la Broquiere was esquire to Philip the Good, Duke of Burgundy. Philip had plans for a new Crusade to the Holy Land and as part of this plan he persuaded Bertrandon to undertake a pilgrimage to the Holy Land to gather intelligence. Bertrandon set off in 1432 disguised as a pilgrim but acting as a spy for Philip, noting important details of the military, political and cultural aspects of Mamluk and Ottoman lands. The resulting account of his travels, translated into English by Thomas Johnes in 1807, provides invaluable information on the region, including the military tactics of the Turks and the early use of gunpowder by the Mamluks. It is also one of the key documents for the history of the Crusades in the late medieval period.

Professor Morris Rossabi, Professor of Inner Asian History, Weatherhead East Asian Institute, Columbia University and Distinguished Professor of History, Queens College, The City University of New York. Bertrandon de la Broquiere (d. 1459) was born in the Duchy of Aquitaine and was esquire to Philip the Good. At the instigation of Philip he undertook a pilgrimage to the Holy land. Dressed as a pilgrim, he was essentially spying for Philip, who had plans to raise another Crusade to the Holy Land. Through the offices of Philip he contracted a marriage with the daughter of one of the richest heiresses in Artois. Bertrandon was present at the Battle of Gavere and was present when the conditions of peace were agreed. He died in 1459. Thomas Johnes, who translated the work, was an MP, landscape architect, writer and social benefactor. He was an enlightened landowner building a church, school and magnificent gardens for his tenants and encouraging them to improve their farming methods. He was awarded the Gold Medal of the Royal Society of Arts medal five times for his tree planting. A Fellow of the Royal Society, he translated a number of books from French into English of which Travels of Bertrandon de la Broquiere is the best known.