The Emotion Machine: Commonsense Thinking, Artificial Intelligence, and the Future of the Human Mind (Paperback) 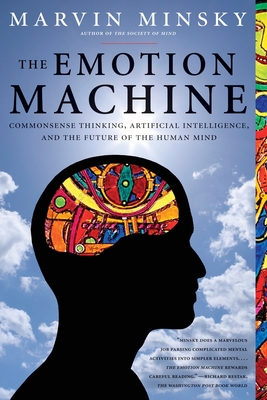 In this mind-expanding book, scientific pioneer Marvin Minsky continues his groundbreaking research, offering a fascinating new model for how our minds work. He argues persuasively that emotions, intuitions, and feelings are not distinct things, but different ways of thinking.

By examining these different forms of mind activity, Minsky says, we can explain why our thought sometimes takes the form of carefully reasoned analysis and at other times turns to emotion. He shows how our minds progress from simple, instinctive kinds of thought to more complex forms, such as consciousness or self-awareness. And he argues that because we tend to see our thinking as fragmented, we fail to appreciate what powerful thinkers we really are. Indeed, says Minsky, if thinking can be understood as the step-by-step process that it is, then we can build machines -- artificial intelligences -- that not only can assist with our thinking by thinking as we do but have the potential to be as conscious as we are.

Eloquently written, The Emotion Machine is an intriguing look into a future where more powerful artificial intelligences await.

Marvin Minsky is Toshiba Professor of Media Arts and Sciences, and Professor of Electrical Engineering and Computer Science at the Massachusetts Institute of Technology. His research has led to many advances in artificial intelligence, psychology, physical optics, mathematics, and the theory of computation. He has made major contributions in the domains of computer graphics, knowledge and semantics, machine vision, and machine learning. He has also been involved with technologies for space exploration.

Professor Minsky is one of the pioneers of intelligence-based robotics. He designed and built some of the first mechanical hands with tactile sensors, visual scanners, and their software and interfaces. In 1951 he built the first neural-network learning machine. With John McCarthy he founded the MIT Artificial Intelligence Laboratory in 1959. He has written seminal papers in the fields of artificial intelligence, perception, and language. His book The Society of Mind contains hundreds of ideas about the mind, many of which he has further developed in this book.