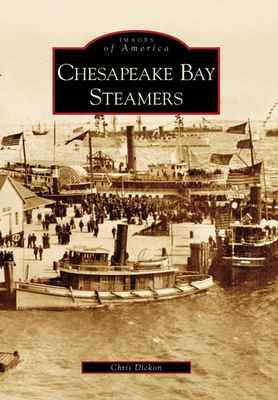 By Chris Dickon
Email or call for price
Special Order

The Chesapeake Bay has been a multifaceted engine of American history and commerce since its first settlers touched the shore in the early 1600s.

Since English settlers first touched the shore of the new country in 1607, the Chesapeake Bay has been a multifaceted engine of American history and commerce. The body of inland tidal water between the largest bay cities, Norfolk and Baltimore, was large enough to be the setting of adventure and close enough to allow smaller towns and cities to grow up on its shores. The common community came to life with the technologies of steamboats that could cover the long distances between North and South relatively quickly. Steamers filled in the nooks and crannies of the bay's geography, and by the mid-19th century, the skies over the bay were lined with dark, waterborne contrails in all directions. Strong machines built to master rough seas while moving gently enough for small harbors, many steamers had life spans that crossed whole eras in American history.

Some were drafted into distinguished service in domestic and foreign wars. The steamers plied the bay and its rivers with a feminine grace well into the mid-20th century, when they were overtaken by the rush of modern times. The last steamer sailed into oblivion exactly 150 years after the first of them appeared in Baltimore harbor.