The Highwayman: A Longmire Story (A Longmire Mystery) (Paperback) 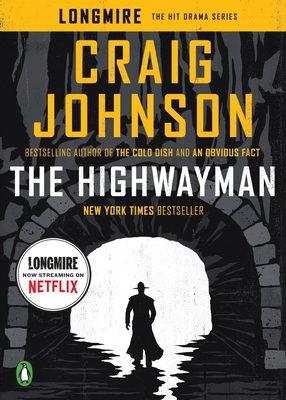 Super spooky.  Super atmospheric.  Not just for lovers of the Longmire series (this was my first foray outside of the TV series).  Craig Johnson makes me want to go to Montana.

Super spooky.  Super atmospheric.  Not just for lovers of the Longmire series (this was my first foray outside of the TV series).  Craig Johnson makes me want to go to Montana.

Craig Johnson's new novel, The Western Star, will be available from Viking in Fall 2017.

When Wyoming highway patrolman Rosey Wayman is transferred to the beautiful and imposing landscape of the Wind River Canyon, an area the troopers refer to as no-man's-land because of the lack of radio communication, she starts receiving “officer needs assistance” calls. The problem? They're coming from Bobby Womack, a legendary Arapaho patrolman who met a fiery death in the canyon almost a half-century ago. With an investigation that spans this world and the next, Sheriff Walt Longmire and Henry Standing Bear take on a case that pits them against a legend: The Highwayman.

“You don’t have to be a fan of Longmire, the hit Netflix series, to appreciate this clever tale.” —Publishers Weekly

"This ghost story is a great tale with enough twists and turns to make it a fun read. A reader new to the series can dive into the Longmire world immediately and will likely want to go back and read all of its previous entries."
—Deseret News

"Just a pure story that would be right at home being told around a campfire: immediately engaging, filled with turns and surprises, with an ending that comes too soon."—The Gazette

"An especially good tale . . . If you are not familiar with Longmire, you might want to meet him. If you know him, don't miss his latest case." —Charleston Post & Courier

"The [Longmire] series continues to be fresh and innovative. . . . Devoted series fans won't feel a sense of déjà vu in Dry Bones, but they will easily identify Johnson's tendency toward innovative imagery . . . crack dialogue, humor and a strong sense of place. Absaroka's maker brings dem bones to life, and readers are sure to rejoice." —Shelf Awareness