We hosted an event with this author
3 weeks 14 hours ago
Check here for a signed copy or email us at info@left-bank.com.

A Star Is Dead (Hardcover) 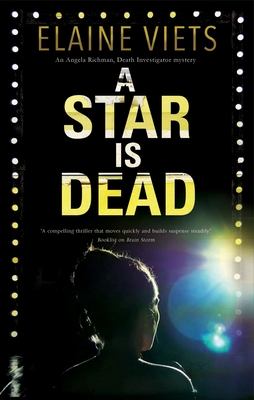 Hollywood diva Jessica Gray is on the last leg of her one-woman show when she suffers a sudden and fatal illness . . . but Angela Richman thinks there's more to it. "Ageless" Hollywood diva Jessica Gray is finishing the last leg of her one-woman show in St Louis, Missouri, and the nearby town of Chouteau Forest is dazzled. During the show she humiliates three homeless women onstage, fires her entourage - not for the first time - and makes a bitter enemy of the town's powerful patriarch. After she collapses at an after-show party and is rushed to the hospital, she ignores the advice of her doctors and discharges herself in order to return to LA. On the way to the airport she suffers a deadly coughing fit. It was poison. When Angela Richman's friend, Mario, is arrested for the murder and faces the death penalty, she is compelled to investigate. With so many grudges held against the actress and Mario's life on the line, the stakes are higher than ever.

Elaine Viets returns to her hardboiled roots with her Angela Richman, Death Investigator series. A Star Is Dead is the latest, following Fire and Ashes and Brain Storm, and the novella Ice Blonde. Elaine has 34 bestselling mysteries in four series, including the Dead-End Job mysteries and the Josie Marcus, Mystery Shopper series. A St Louis native, Elaine took the Medicolegal Death Investigator Training Course for forensic professionals at St Louis University. She has previously won the Agatha, Anthony and Lefty Awards. Elaine lives in Fort Lauderdale, Florida, with her husband, writer and reviewer Don Crinklaw.