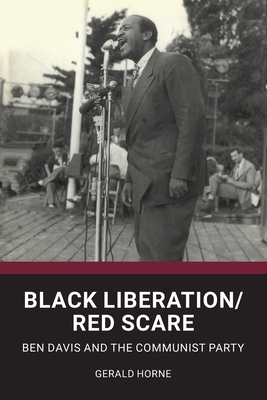 Black Liberation/Red Scare is a study of an African American Communist leader,

Ben Davis, Jr. (1904-64). Though it examines the numerous grassroots campaigns

that he was involved in, it is first and foremost a study of the man and secondarily a

study of the Communist party from the 1930s to the 1960s. By examining the public

life of an important party leader, Gerald Horne uniquely approaches the story of how

and why the party rose and fell.

Ben Davis, Jr., was the son of a prominent Atlanta publisher and businessman who

the Great Depression. Davis was trained for the black elite at Morehouse, Amherst,

and Harvard Law School. After graduating from Harvard, he joined the Communist

party, where he remained as one of its most visible leaders for thirty years. In 1943,

after being endorsed by his predecessor, Adam Clayton Powell, Jr., he was elected to

margin in 1945. Davis received support from such community figures as NAACP

leader Roy Wilkins, boxer Joe Louis, and musician Duke Ellington. While on the

With the onset of the Red Scare and the Cold War, Davis-like the Communist party itself

was marginalized. The Cold War made it difficult for the U.S. to compete with Moscow for

citizenship at home. Yet in return for civil rights concessions, African American organizations

such as the NAACP were forced to distance themselves from figures such as Ben Davis. In

1949 he was ousted unceremoniously (and perhaps illegally from the City Council. He was

put on trial, jailed in 1951, and not released until 1956, when the civil rights movement was

gathering momentum. His friendship with the King family, based upon family ties in Atlanta,

was the ostensible cause for the FBI surveillance of Dr. Martin Luther King, Jr.

COINTEL-PRO, the counterintelligence program of the FBI, which was aimed initially at

the CPUSA, made sure to keep a close eye on Davis as well. But when the civil rights

campuses helped to set the stage for a new era of activism at universities.

Davis died in 1964. According to Horne, the time has now come when he, along with

his good friend Paul Robeson and W. E. B. DuBois, should be regarded as a premier leader

of African- Americans and the U.S. Left during the twentieth century.