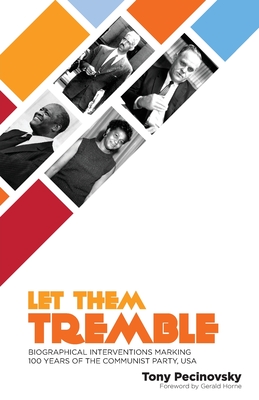 Autographed copies of Let Them Tremble available until they are gone!

Let Them Tremble: Biographical Interventions Marking 100 Years of the Communist Party, USA is a collection of six biographies exploring unique and often neglected aspects of the Communist Party, USA (CPUSA). Each biographical intervention explores a specific CPUSA leader's life, work and times and places them within political and historical context. The goal of these interventions is not to tell a complete story, to paint a complete picture; intimate knowledge of personal lives and relationships is not the goal and is largely absent. Rather, the goal is for each biography to tell a partial political story, a story that emphasizes topical aspects of the Party's ongoing work, especially in the post 1956 period. The hope is that each individual partial story helps build on and adds to a completer and more complex CPUSA history, thereby helping to create a larger organizational narrative more easily digested and discussed by students. This project is not a complete history of the CPUSA. It is a series of thematic narratives that each tell a political story through biographical interventions.

The interventions collectively span the bulk of the Party's history, not just the so-called Heyday, Popular Front, McCarthy or Old Left periods. Special emphasis is placed on Party activity and analysis in the 1960's, 1970's and 1980's, up to the Party's centennial. Comprehensive histories of Party activity during the second half of the 20th century written by more competent authors is desperately needed. The biographical interventions constituting this project are a sincere attempt to add some nuance and complexity, to explore a neglected period of communist activity in U.S. history, and thereby add knowledge, breadth and depth to the study of U.S. radicalism in the 20th century.

Each biography consists of two or three overarching themes; the individual narratives largely focus on aspects of Party work as they relate to these themes. Often Party leaders held numerous positions within the organization and took on multiple assignments, which could easily constitute larger projects. However, the intent here is not to cover the waterfront. It is to focus on specific themes, to dig down. All of the communists in this study spent most of their adult lives as Party leaders, in one form or another. Some, such as Gus Hall, spent their lives as full-time revolutionaries. Others, like W. Alphaeus Hunton, never held an official Party position and was never on Party pay roll. And still others, Charlene Mitchell and Judith Le Blanc, for example, served as fulltime Party staff - in different capacities - but also led mass movements where their Party membership was known, but not necessarily advertised. I have avoided Party leaders who have been given considerable biographical attention by other authors: William Z. Foster, Claudia Jones, Ben Davis, Jr., Elizabeth Gurley Flynn, James and Esther Cooper Jackson, William Patterson, and Angela Davis, among others.