The View from Saturday (Paperback) 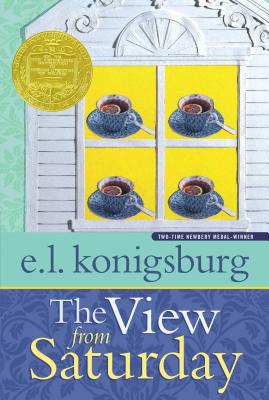 The View from Saturday (Paperback)

My all time favorite children's book-The story telling and character development are fantastic! The book renewed my child-like wonder, offered lots of humorous moments and demonstrated how powerful friendships can be.

— From Andrea
From the Newbery Medal–winning author of the beloved classic From the Mixed-Up Files of Mrs. Basil E. Frankweiler comes four jewel-like short stories—one for each of the team members of an Academic Bowl team—that ask questions and demonstrate surprising answers.

How had Mrs. Olinski chosen her sixth-grade Academic Bowl team? She had a number of answers. But were any of them true? How had she really chosen Noah and Nadia and Ethan and Julian? And why did they make such a good team?

It was a surprise to a lot of people when Mrs. Olinski’s team won the sixth-grade Academic Bowl contest at Epiphany Middle School. It was an even bigger surprise when they beat the seventh grade and the eighth grade, too. And when they went on to even greater victories, everyone began to ask: How did it happen?

Mrs. Olinski, returning to teaching after having been injured in an automobile accident, found that her Academic Bowl team became her answer to finding confidence and success. What she did not know, at least at first, was that her team knew more than she did the answer to why they had been chosen.
E.L. Konigsburg is the only author to have won the Newbery Medal and a Newbery Honor in the same year. In 1968, From the Mixed-Up Files of Mrs. Basil E. Frankweiler won the Newbery Medal and Jennifer, Hecate, Macbeth, William McKinley, and Me, Elizabeth was named a Newbery Honor Book. Almost thirty years later she won the Newbery Medal once again for The View from Saturday. Among her other acclaimed books are Silent to the Bone, The Outcasts of 19 Schuyler Place, and The Mysterious Edge of the Heroic World.