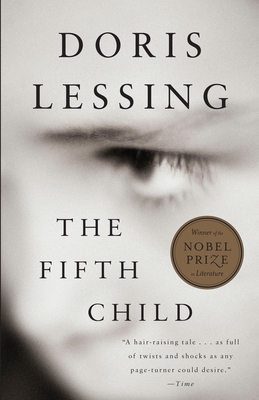 A very dark and haunting story about the lengths a mother will go to for a child that she does not love.

— From Baeyle
Doris Lessing's contemporary gothic horror story—centered on the birth of a baby who seems less than human—probes society's unwillingness to recognize its own brutality.Harriet and David Lovatt, parents of four children, have created an idyll of domestic bliss in defiance of the social trends of late 1960s England. While around them crime and unrest surge, the Lovatts are certain that their old-fashioned contentment can protect them from the world outside—until the birth of their fifth baby. Gruesomely goblin-like in appearance, insatiably hungry, abnormally strong and violent, Ben has nothing innocent or infant-like about him. As he grows older and more terrifying, Harriet finds she cannot love him, David cannot bring himself to touch him, and their four older children are afraid of him. Understanding that he will never be accepted anywhere, Harriet and David are torn between their instincts as parents and their shocked reaction to this fierce and unlovable child whose existence shatters their belief in a benign world.
Doris Lessing was born of British parents in Persia, in 1919, and moved with her family to Southern Rhodesia when she was five years old. She went to England in 1949 and has lived there ever since. She is the author of more than thirty books—novels, stories, reportage, poems, and plays. In 2007, she was awarded the Nobel Prize in Literature.

“A hair-raising tale…as full of twists and shocks as any page turner could desire.” —Time“Terse and chilling…. A witch’s brew of conflicting fears.” —The New York Review of Books“A horror story of maternity and the nightmare of social collapse…. A moral fable of the genre that includes Mary Shelley’s Frankenstein and George Orwell’s Nineteen Eighty-Four.” —The New York Times Book Review