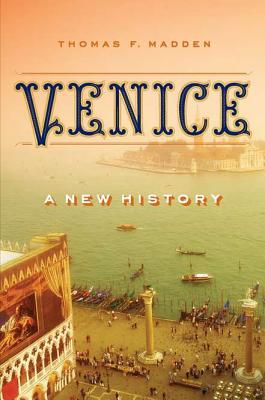 By Thomas F. Madden
This book might be hard to find. Ask a bookseller for more information.
Out of Print

An extraordinary chronicle of Venice, its people, and its grandeur
Thomas Madden's majestic, sprawling history of Venice is the first full portrait of the city in English in almost thirty years. Using long-buried archival material and a wealth of newly translated documents, Madden weaves a spellbinding story of a place and its people, tracing an arc from the city's humble origins as a lagoon refuge to its apex as a vast maritime empire and Renaissance epicenter to its rebirth as a modern tourist hub.
Madden explores all aspects of Venice's breathtaking achievements: the construction of its unparalleled navy, its role as an economic powerhouse and birthplace of capitalism, its popularization of opera, the stunning architecture of its watery environs, and more. He sets these in the context of the rise and fall of the Byzantine Empire, the endless waves of Crusades to the Holy Land, and the awesome power of Turkish sultans. And perhaps most critically, Madden corrects the stereotype of Shakespeare's money-lending Shylock that has distorted the Venetian character, uncovering instead a much more complex and fascinating story, peopled by men and women whose ingenuity and deep faith profoundly altered the course of civilization.

Thomas F. Madden is a professor of history and the director of the Center for Medieval and Renaissance Studies at Saint Louis University in Missouri.He is the author of "The New Concise History of the Crusades, Enrico Dandolo and the Rise of Venice, The Fourth Crusade, "andEmpires of Trust. In 2012 he was named a Fellow of the John Simon Guggenheim Memorial Foundation."

"Breezy, cheerful, evenhanded, Madden debunks myths about Venetian decadence, and brushes aside ugly whispers about greedy, unscrupulous merchants.  When a colorful character pops up (Marco Polo, Casanova), he makes the most of it in his brisk, no-nonsense prose." -- New York Times

"This is a savory, tantalizing, but not-so-serene history of La Serenissima -- a tale of invasion, plunder, and ultimate elevation to one of the leading merchant cities in Europe.  ...Madden makes use of thousands of Venetians' personal documents from the Middle Ages to present an authoritative history." -- Publishers Weekly   "Madden paints a vivid portrait of 'a city without land, an empire without borders.'  His engaging work enters a sparse historiography... and separates itself by offering a readable overview backed by solid research. Readers will come away from Madden's Venice with a newfound respect for one of the great jewels of Western civilization. -- Booklist (Starred Review)   "Plenty of books focus on Venice the romantic ruin.  This one offers a welcome reminder of its historic role over a millennium in the development of a modern economic system and the maintenance of the global balance of power." -- Kirkus Reviews   "Madden presents a popular history as engaging as it is solid.  In graceful, sometimes elegant prose, he details the long life of one of Europe's most intriguing cities...  It is as enjoyable as it is astute." -- Library Journal   "As Thomas F. Madden relates in his excellent new book, the city was once far more than just a romantic tourist destination. ... Madden's book is a lively and lucid survey of Venice's colorful history." -- The Seattle Times

“Madden proves the perfect guide to the magical city of Venice. His history is not only authoritative and encyclopedic, encompassing everything from the plundering of Attila the Hun to Katharine Hepburn’s tribulations while filming Summertime, it is also unfailingly readable and amusing—a must-read for Europhiles, armchair travelers, and history buffs.” —Ross King, author of Brunelleschi’s Dome and Leonardo and the Last Supper

“Thomas Madden’s portrait of Venice glows like one of the city’s own rich and colorful artworks—a tapestry woven from a thousand tales, with unforgettable characters, daring exploits, and inspiring triumphs against overwhelming odds.” —John R. Hale, author of Lords of the Sea


“Madden is that rare talent—a serious scholar who tells a gripping story. He breathes life into Venetian history in all its subtle complexity, rescuing the Venetians from the common stereotype of one-dimensional merchants. This book is a fantastic read.” —Lars Brownworth, author of Lost to the West: The Forgotten Byzantine Empire that Rescued Western Civilization