We Rode the Orphan Trains (Paperback) 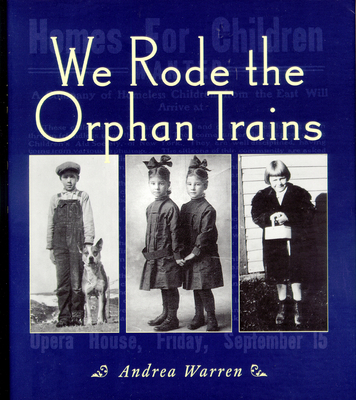 We Rode the Orphan Trains (Paperback)

Listen to child orphans as they share their memories of transition and adventure, disappointment and loneliness, but ultimately of the joy of belonging to their own new families.

They were “throwaway” kids, living in the streets or in orphanages and foster homes. Then Charles Loring Brace, a young minister working with the poor in New York City, started the Children’s Aid Society and devised a plan to give homeless children a chance to find families to call their own.

Thus began an extraordinary migration of American children. Between 1854 and 1929, an estimated 200,000 children, mostly from New York and other cities of the eastern United States, ventured forth to other states on a journey of hope.

Andrea Warren has shared the stories of some of these orphan train riders here, including those of Betty, who found a fairy tale life in a grand hotel; Nettie Evans and her twin, Nellie, who were rescued from their first abusive placement and taken in by a new, kindhearted family who gave them the love they had hoped for; brothers Howard and Fred, who remained close even though they were adopted into different families; and Edith, who longed to know the secrets of her past.

"This is powerful nonfiction for classroom and personal reading and for discussion." (School Library Journal starred review)

Andrea Warren is the author of many acclaimed nonfiction books for young readers, including Orphan Train Rider: One Boy's True Story, which won the Boston Globe–Horn Book Award. Andrea lives in Kansas. Visit her website at www.andreawarren.com.

"This is powerful nonfiction for classroom and personal reading and for discussion." — School Library Journal (starred review)

"As fascinating as the original and a worthy sequel." — Kirkus Reviews