Secrets According to Humphrey (Prebound) 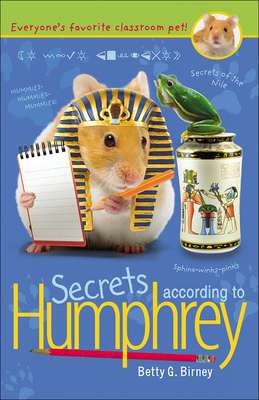 This is book number 10 in the Humphrey series.

Nominated for twenty-four state lists and the winner of seven, Humphrey really is everyone's favorite classroom pet
So many secrets are flying around Room 26 that Humphrey can barely keep track. Mrs. Brisbane knows a student is leaving, but Humphrey can't figure out which one. (Even more confusing, Mrs. Brisbane seems unsqueakably "happy" about it.) The class is studying the Ancient Egyptians, and some of the kids have made up secret clubs and secret codes. Even Aldo is holding back news from Humphrey.
Humphrey's job as classroom pet is to help his humans solve their problems, but all these secrets are making it HARD-HARD-HARD.

Betty G. Birney has won many awards for writing for television, including an Emmy, three Humanitas Prizes, and a Writers Guild of America Award, and she won the Christopher Award for "Friendship According to Humphrey." In addition to the Humphrey series, she is the author of "The Seven Wonders of Sassafrass Springs" and "The Princess and the Peabody's." She grew up in St. Louis, Missouri, where her parents grew up as neighbors on Humphrey Street. Her website, bettybirney.com, is full of fun Humphrey activities and information.