The Wonder Boy of Whistle Stop: A Novel (CD-Audio) 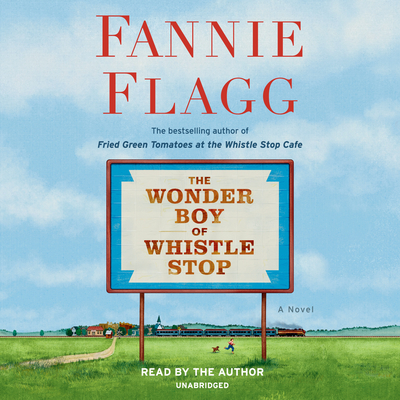 NEW YORK TIMES BESTSELLER • A heartwarming novel about secrets of youth rediscovered, hometown memories, and the magical moments in ordinary lives, from the beloved author of Fried Green Tomatoes at the Whistle Stop Cafe

“A gift, a blessing and a triumph . . . celebrates the bonds of family and friends—and the possibilities of recovery and renewal.”—The Free Lance–Star

Bud Threadgoode grew up in the bustling little railroad town of Whistle Stop with his mother, Ruth, church-going and proper, and his Aunt Idgie, the fun-loving hell-raiser. Together they ran the town’s popular Whistle Stop Cafe, known far and wide for its fun and famous fried green tomatoes. And as Bud often said of his childhood to his daughter Ruthie, “How lucky can you get?”

But sadly, as the railroad yards shut down and Whistle Stop became a ghost town, nothing was left but boarded-up buildings and memories of a happier time.

Then one day, Bud decides to take one last trip, just to see what has become of his beloved Whistle Stop. In so doing, he discovers new friends, as well as surprises about Idgie’s life, about Ninny Threadgoode and other beloved Fannie Flagg characters, and about the town itself. He also sets off a series of events, both touching and inspiring, which change his life and the lives of his daughter and many others. Could these events all be just coincidences? Or something else? And can you really go home again?

Fannie Flagg’s career started in the fifth grade when she wrote, directed, and starred in her first play, titled The Whoopee Girls, and she has not stopped since. At age nineteen she began writing and producing television specials, and later wrote for and appeared on Candid Camera. She then went on to distinguish herself as an actress and a writer in television, films, and the theater. She is the bestselling author of Daisy Fay and the Miracle Man; Fried Green Tomatoes at the Whistle Stop Cafe; Welcome to the World, Baby Girl!; Standing in the Rainbow; A Redbird Christmas; Can’t Wait to Get to Heaven; I Still Dream About You; The All-Girl Filling Station’s Last Reunion; and The Whole Town’s Talking. Flagg’s script for the movie Fried Green Tomatoes was nominated for an Academy Award and the Writers Guild of America Award and won the highly regarded Scripter Award for best screenplay of the year. Fannie Flagg is the winner of the Harper Lee Prize. She lives happily in California and Alabama.

“The story blossoms in vintage Flagg style—folksy and feel-good. An abundance of Southern charm will delight both readers eager to journey back to beloved Whistle Stop and also those wanting to visit for the very first time.”—Shelf Awareness

“Who can resist a visit to Whistle Stop and all her inhabitants, past and present? No one!”—Library Journal

“Reading this novel is like entering a second childhood.”—Kirkus Reviews

“Flagg’s memorable cast returns to Whistle Stop, Ala., made famous in Fried Green Tomatoes, in this heartfelt saga. . . . Flagg’s multitude of fans will enjoy reminiscing and learning more secrets from her well-known protagonists.”—Publishers Weekly

“Spellbinding storytelling, deftly drawn characters and an unerring ear for credible dialogue . . . The Wonder Boy of Whistle Stop represents a gift, a blessing and a triumph. . . . It showcases Flagg’s ability to write a sweet but never saccharine, comical but never cruel, profound but never pompous narrative; it celebrates the bonds of family and friends—and the possibilities of recovery and renewal.”—Fredericksburg Free Lance-Star

“The Wonder Boy of Whistle Stop is a captivating novel with characters and relationships to be savored, as well as ample servings of hope and inspiration. These are venerable storytelling qualities which surely are needed now more than ever. . . . The Wonder Boy of Whistle Stop should garner an even wider fan-base for Flagg, a well-deserved outcome for an exceptional writer.”—New York Journal of Books