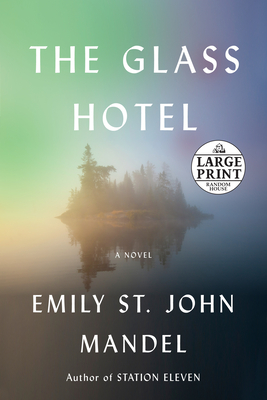 Autographed copies of The Glass Hotel available until they're gone!

Mesmerizing, enthralling, hypnotic, hauntingly beautiful--I can throw all the clichéd adjectives at it I’d like, and I wouldn’t be wrong. But, simply put, “The Glass Hotel” is wonderful. I dare you to read it only once! - randy's April Staff Pick, 2020

From the award-winning author of Station Eleven, an exhilarating novel set at the glittering intersection of two seemingly disparate events-a massive Ponzi scheme collapse and the mysterious disappearance of a woman from a ship at sea.

Vincent is a bartender at the Hotel Caiette, a five-star lodging on the northernmost tip of Vancouver Island. On the night she meets Jonathan Alkaitis, a hooded figure scrawls a message on the lobby's glass wall: "Why don't you swallow broken glass." High above Manhattan, a greater crime is committed: Alkaitis is running an international Ponzi scheme, moving imaginary sums of money through clients' accounts. When the financial empire collapses, it obliterates countless fortunes and devastates lives. Vincent, who had been posing as Jonathan's wife, walks away into the night. Years later, a victim of the fraud is hired to investigate a strange occurrence: a woman has seemingly vanished from the deck of a container ship between ports of call.

In this captivating story of crisis and survival, Emily St. John Mandel takes readers through often hidden landscapes: campgrounds for the near-homeless, underground electronica clubs, the business of international shipping, service in luxury hotels, and life in a federal prison. Rife with unexpected beauty, The Glass Hotel is a captivating portrait of greed and guilt, love and delusion, ghosts and unintended consequences, and the infinite ways we search for meaning in our lives.

EMILY ST. JOHN MANDEL's four previous novels include Station Eleven, which was a finalist for a National Book Award and the PEN/Faulkner Award and has been translated into thirty-two languages. She lives in New York City with her husband and daughter.

"The question of what is real—be it love, money, place or memory—has always been at the heart of Ms. Mandel’s fiction... her narratives snake their way across treacherous, shifting terrain. Certainties are blurred, truth becomes malleable and in The Glass Hotel the con man thrives... Lyrical, hypnotic images... suspend us in a kind of hallucinatory present where every detail is sharply defined yet queasily unreliable. A sense of unease thickens... Ms. Mandel invites us to observe her characters from a distance even as we enter their lives, a feat she achieves with remarkable skill. And if the result is a sense not only of detachment but also of desolation, then maybe that’s the point."—Anna Mundow, Wall Street Journal

"An eerie, compelling follow-up... not your grandmother’s Agatha Christie murder mystery or haunted hotel ghost story... The novel’s ongoing sense of haunting extends well beyond its ghosts... The ghosts in  The Glass Hotel are directly connected to its secrets and scandals, which mirror those of our time... Like all Mandel’s novels, The Glass Hotel is flawlessly constructed... The Glass Hotel declares the world to be as bleak as it is beautiful, just like this novel.""—Rebecca Steinitz, The Boston Globe

"Mandel... specializes in fiction that weaves together seemingly unrelated people, places and things. The Glass Hotel... is no exception... Kaleidoscopic... Mandel dissects the surreal division between those who are conscious of ongoing crimes, and those who are unwittingly brought into them... The Glass Hotel... examine[s]  how we respond to chaos after catastrophe."—Annabel Gutterman, Time

"A careful, damning study of the forms of disaster humanity brings down on itself... In a world where rolling disasters fade into one another, it’s a reminder that Mandel wants to lurch us out of the tedium."—Hillary Kelly, Vulture

"The Glass Hotel will haunt you… Mandel delicately illuminates the devastation wreaked on the fraud’s victims while brilliantly teasing out the hairsbreadth moments in which a person can seamlessly slide into moral corruption… The Glass Hotel isn’t so much plot driven as it is coiled—a taut braid of lives undone by Alkaitis’ and others’ grifts… negotiating slippery ethics and questionable compromises, and the liminal space between innocence and treachery.” —Ivy Pochoda, O Magazine

"Deeply imagined, philosophically profound… The Glass Hotel moves forward propulsively, its characters continually on the run… Richly satisfying… The Glass Hotel is ultimately as immersive a reading experience as its predecessor [Station Eleven], finding all the necessary imaginative depth within the more realistic confines of its world… Revolutionary.”—Ruth Franklin, The Atlantic

"Long-anticipated... At its heart, this is a ghost story in which every boundary is blurred, from the moral to the physical... In luminous prose, Mandel shows how easy it is to become caught in a web of unintended consequences and how disastrous it can be when such fragile bonds shatter under pressure. A strange, subtle, and haunting novel. —Kirkus Reviews, starred

"Another tale of wanderers whose fates are interconnected... nail-biting tension... Mandel weaves an intricate spider web of a story... A gorgeously rendered tragedy."—Booklist, starred

"Mandel’s wonderful novel (after Station Eleven) follows a brother and sister as they navigate heartache, loneliness, wealth, corruption, drugs, ghosts, and guilt... This ingenious, enthralling novel probes the tenuous yet unbreakable bonds between people and the lasting effects of momentary carelessness."—Publishers Weekly, starred