The Woman's Hour (Adapted for Young Readers): Our Fight for the Right to Vote (Library Binding) 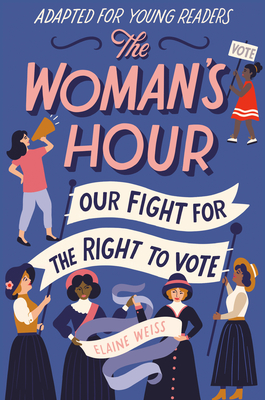 “Over the course of two steamy weeks in August 1920, hordes of suffragists, anti-suffragists, lobbyists, and lawmakers descended on Nashville in a fight to make Tennessee the 36th and final state to ratify the 19th Amendment, giving women the right to vote. This was the final chance, and both sides would do whatever it took to win - bullying, bribery, blackmail, and even kidnapping. I was on the edge of my seat. I had no idea how close the suffragists came to losing. This is narrative nonfiction at its best.”
— Lisa Wright, Oblong Books And Music,LLC., Millerton, NY

This adaptation of the book Hillary Clinton calls "a page-turning drama and an inspiration" will spark the attention of young readers and teach them about activism, civil rights, and the fight for women's suffrage--just in time for the 100th anniversary of the ratification of the Nineteenth Amendment. Includes an eight-page photo insert!

American women are so close to winning the right to vote. They've been fighting for more than seventy years and need approval from just one more state.

But suffragists face opposition from every side, including the "Antis"--women who don't want women to have the right to vote. It's more than a fight over politics; it's a debate over the role of women and girls in society, and whether they should be considered equal to men and boys.

Over the course of one boiling-hot summer, Nashville becomes a bitter battleground. Both sides are willing to do anything it takes to win, and the suffragists--led by brave activists Carrie Catt, Sue White, and Alice Paul--will face dirty tricks, blackmail, and betrayal. But they vow to fight for what they believe in, no matter the cost.

Elaine Weiss is a journalist and author whose magazine feature writing has been recognized with prizes from the Society of Professional Journalists, and her byline has appeared in many national publications, as well as in reports for National Public Radio. Elaine's book about the woman suffrage movement, The Woman's Hour: The Great Fight to Win the Vote, has earned glowing reviews from the New York Times, the Wall Street Journal, and NPR, among others, and she has presented talks about the book and the woman suffrage movement across the country. Elaine lives in Baltimore, Maryland, with her husband, and they have two grown children. When not working at her desk, she can be found paddling her kayak on the Chesapeake Bay. And she votes in every election.

"An entertaining work of narrative nonfiction that takes readers back in time. A must-purchase." —School Library Journal, Starred Review

"Brief profiles of women involved in both the radical and the more traditional wings of the suffrage movement offer rich insight into the determination of these brave crusaders. . . . An inspiring tale that just might spark greater voter participation." —Kirkus Reviews

"A notable book that highlights the past and future of women’s empowerment." —Booklist