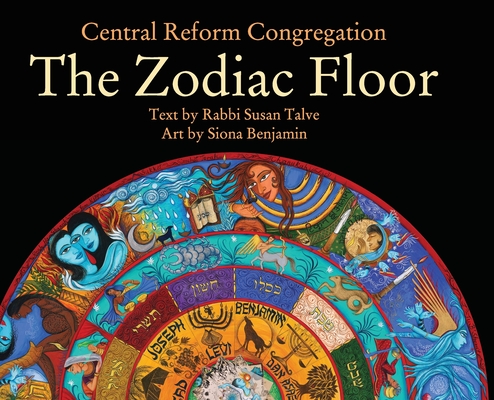 Rabbi Susan Talve and Indian-Jewish artist Siona Benjamin sat together in the back of a bus leaving Jaipur, India, and they began imagining. What they dreamed about on that trip across the world in 2014 were their plans for a circular mosaic floor for Central Reform Congregation that would be like those that adorn the floors of ancient synagogues in Israel. But theirs would have an edge: It would celebrate traditional Jewish holidays but also feminism and racial, cultural and gender diversity. It would feature astrological symbols of the Zodiac wheel.

Now, those ideas that Benjamin and Talve envisioned on a back road in India have been transformed into a 15-foot diameter mosaic on the floor of the synagogue's entrance lobby.

Benjamin, who lives outside New York City in Montclair, N.J., spent over a year working on the CRC floor design and painting in close consultation with the rabbi. A scan of the painting was created, and 320 porcelain tiles with ceramic glaze were fired at a very high temperature and numbered to fit together like a jigsaw puzzle.

On Shabbat on Aug. 14, 2015, the congregation saw the completed mosaic floor for the first time. While its holiday themes, laid out in chronological order around the circle, elicit feelings of warmth and tradition, the mosaic is provocative and challenging.

The Mosaic Floor offers beautiful photographs of the artwork and the story of the journey.

Contributor Bio:  Talve, Rabbi Susan
Rabbi Susan Talve is the founding rabbi of Central Reform Congregation, the only Jewish Congregation located within the city limits of St. Louis, Missouri. When other congregations were leaving the city for the suburbs, Rabbi Susan joined with a small group to keep a vibrant presence in the city to be on the front line of fighting the racism and poverty plaguing the urban center. Today she performs life cycle events, leads worship services for the seven hundred fifty plus households that comprise the congregation, and is actively involved in the teaching of young and adult members. She also teaches courses on Jewish life and thought and in both the Jewish and non-Jewish Communities. Rabbi Susan was ordained by Hebrew Union College in Cincinnati in 1981, where she earned a Master's Degree in Hebrew Letters and a Doctor of Divinity. She was honored with the college's Stephen Levinson Award for Community Service after founding the Jewish Early Learning Cooperative, Ohio's first licensed infant childcare program in the workplace. She was the first non-Christian to receive an honorary Doctorate from Eden Theological Seminary in 2011 for a career of visionary and bold leadership and supporting interfaith relations in the St. Louis community. She was awarded honorary degrees from Washington University, St Lawrence University and has received many awards for her efforts on behalf of the Jewish and non-Jewish community. She and her husband, Rabbi James Stone Goodman are the proud parents of three wonderful adults and two grandsons.

Contributor Bio:  Benjamin, Siona
Siona Benjamin's unique perspective as an Indian-American-Jewish artist has inspired her to create art that represents her transcultural and multicultural narrative. Often featuring blue characters, Siona's work illuminates vibrant colors, cultural & religious symbols in various mediums to create works that have synergy and meaning. Her art has been shown in galleries, museums & sacred spaces around the world. She was awarded two prestigious Fulbright Fellowships to explore the theme of multicultural art in Israel and India. She creates art installations, art commissions, and artworks for private and public spaces. As an artist & speaker, she shares her personal journey through live speaking engagements.