An American Divorce: A Profound Protest Against The Politics Of Guilt And Fascism (Paperback) 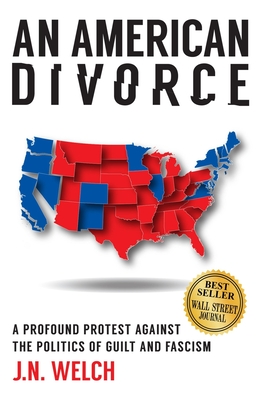 Is the United States facing a societal "divorce"? Roughly two thirds of Americans believe another civil war could occur in today's political climate. And it is easy to understand why. Three impeachments in the last four presidencies. A weak US presidency. A partisan divide perhaps greater than that of the 1860s. With perhaps impeccable timing, this Wall Street Journal best-selling author contemplates an exit strategy for what has become a broken democracy. From the benign to the revolutionary, this provocative book moves beyond the question of "why" to the more important question of "how" the United States can move beyond the political and cultural dysfunction that has divided the country to the point of democratic paralysis. Is America inherently racist? Or has academia been complicit in brainwashing millions of Americans into believing the United States should only be judged from the context of guilt and privilege? Do today's "Democrat Socialists" really care about blue collar voters; or are they using subversive tactics to pursue a globalist utopia? Arguing the emergence of political actors like Donald Trump and Bernie Sanders is no democratic accident, this anonymous author contemplates the pros and cons of taking America to the brink to defeat a stealth cancer that hides behind the slogans of social justice, tolerance, and equity. Borrowing from leftist radicals like Alinsky and Marx, this book provides a mass-movement roadmap to those Black, Brown, and White Americans who desperately hope to move beyond the false allure of identity politics and cancel culture. From contemplating whether a new Republican Party can break today's political gridlock...to openly discussing the radical idea of a geographical breakup of the United States of America, An American Divorce seeks to chart a new course for a country in great peril. In what could best be described as the ultimate game of revolutionary poker, this author boldly goes beyond the sweeping arc of political correctness to tackle questions that are rarely debated in academia or the mainstream media:
Republicans may be surprised-but the author doesn't want to destroy everyday Democrats. Nor is this book based on the ignorant and primitive idea of dividing the United States by race. Rather, An American Divorce targets the Marxist thought police--social science academics and radical leftist agitators who use the vehicle of social justice to pursue an intellectual fantasyland that will never exist. Released as the nation is reeling from a global pandemic, political/economic uncertainty, and racial unrest, this book is a must-read for those Americans who hope to move beyond the hate, division, and dysfunction that we today call the United States of America. Controversial, provocative, and revolutionary, An American Divorce is urgent reading for our troubled times.