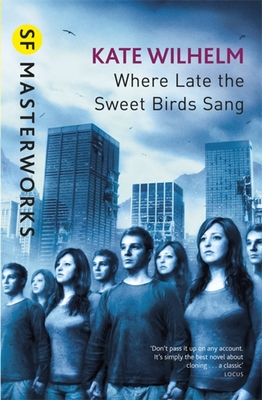 The Sumner family can read the signs: the droughts and floods, the blighted crops, the shortages, the rampant diseases and plagues, and, above all, the increasing sterility all point to one thing. Their isolated farm in the Appalachian Mountains gives them the ideal place to survive the coming breakdown, and their wealth and know-how gives them the means. Men and women must clone themselves for humanity to survive. But what then?

Kate Wilhelm (1928-2018)Working name of the US writer Katie Gertrude Meridith Wilhelm Knight, born in Ohio in 1928. She started publishing SF in 1956 with 'The Pint-Sized Genie' for Fantastic, and continued for some time with relatively straightforward genre stories; it was not until the late 1960s that she began to release the mature stories which have made her reputation as one of the 20th century's finest SF writers. She was married to noted author and critic Damon Knight and together they have had a profound influence beyond their writing, through the Milford Science Fiction Writers' Conference and its offshoot, in which she was directly involved, the Clarion Science Fiction Writers' Workshop. She won the Hugo Award for Best Novel with Where Late the Sweet Birds Sang, and has won the Nebula Award three times. Kate Wilhelm died in 2018, aged 89.