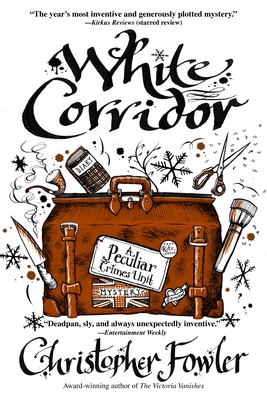 This is book number 5 in the Peculiar Crimes Unit series.

It’s the classic locked-room mystery—a member of the Peculiar Crimes Unit killed inside a sealed morgue populated only by the dead and to which only four PCU members had a key. To make matters worse, the Unit has been shut down for a forced “vacation,” and Bryant and May are stuck in a van in the Dartmoor countryside during a freak snowstorm. Now they’ll have to crack the case by cell phone while trying to stop a second murder without freezing to death. For among the line of trapped vehicles, a killer is on the prowl, a beautiful woman is on the run, and an innocent child is caught in the middle….

Christopher Fowler is the acclaimed author of the award-winning Full Dark House and nine other Peculiar Crimes Unit mysteries: The Water Room, Seventy-Seven Clocks, Ten Second Staircase, White Corridor, The Victoria Vanishes, Bryant & May on the Loose, Bryant & May off the Rails, The Memory of Blood, and The Invisible Code. He lives in London, where he is at work on his next Peculiar Crimes Unit novel.

“Blending humor and brilliant detection.... Fowler shows himself to be a master of the ‘impossible crime’ tale.... Excellent.”—Publishers Weekly, starred review