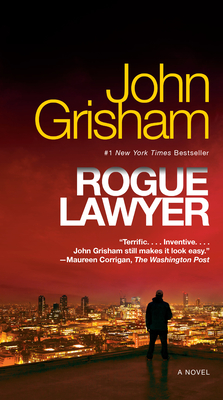 
Ships quickly (1-7 days)
#1 NEW YORK TIMES BESTSELLER • Featuring one of John Grisham’s most colorful, outrageous, and vividly drawn characters yet, Rogue Lawyer showcases the master of the legal thriller at his very best.

On the right side of the law—sort of—Sebastian Rudd is not your typical street lawyer. His office is a customized bulletproof van, complete with Wi-Fi, a bar, a small fridge, and fine leather chairs. He has no firm, no partners, and only one employee: his heavily armed driver, who also so happens to be his bodyguard, law clerk, confidant, and golf caddie. Sebastian drinks small-batch bourbon and carries a gun. He defends people other lawyers won’t go near: a drug-addled, tattooed kid rumored to be in a satanic cult; a vicious crime lord on death row; a homeowner arrested for shooting at a SWAT team that mistakenly invaded his house. Why these clients? Because Sebastian believes everyone is entitled to a fair trial—even if he has to bend the law to secure one.
John Grisham is the author of forty-seven consecutive #1 bestsellers, which have been translated into nearly fifty languages. His recent books include The Judge's List, Sooley, and his third Jake Brigance novel, A Time for Mercy, which is being developed by HBO as a limited series.

ONE OF THE BEST BOOKS OF THE YEAR: THE WASHINGTON POST AND NPR

“Deeply engaging and entertaining . . . [Grisham finds] intense drama in the little skirmishes that play out across our legal system every day.”—Charles Finch, USA Today

“Grisham has taken a step in an intriguing new direction.”—Janet Maslin, The New York Times