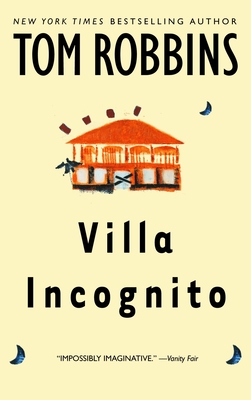 Imagine there are American MIAs who chose to remain missing after the Vietnam War. Imagine a family in which four generations of strong, alluring women share a mysterious connection to an outlandish figure from Japanese folklore. Imagine them part of a novel that only Tom Robbins could create—a magically crafted work as timeless as myth yet as topical as the latest international threat. But no matter how hard you try, you’ll never imagine what you’ll find inside the Villa Incognito: a tilt-a-whirl of identity, masquerade, and disguise that dares to pull off “the false mustache of the world” and reveal the even greater mystery underneath. For neither the mists of Laos nor the Bangkok smog, neither the overcast of Seattle nor the fog of San Francisco, neither the murk of the intelligence community nor the mummery of the circus can obscure the pure linguistic phosphor that illuminates every page of one of America’s most consistently surprising and inventive writers.

Tom Robbins has been called “a vital natural resource” by The Oregonian, “one of the wildest and most entertaining novelists in the world” by the Financial Times of London, and “the most dangerous writer in the world today” by Fernanda Pivano of Italy’s Corriere della Sera. A Southerner by birth, Robbins has lived in and around Seattle since 1962.

"Robbins...is to words what Uri Geller is to spoons: He bends sentences into playful escapades....Bottom line: Another bedside attraction."—People

“Robbins remains a welcome breath of fresh air in American literature.”—Globe and Mail