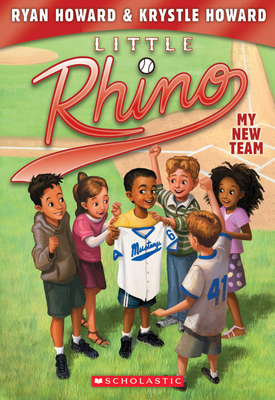 This is book number 1 in the Little Rhino series.

A new chapter book series from Major League Baseball's 2006 National League MVP, Ryan Howard!Every day when Little Rhino comes home from school, he finishes his homework, grabs his bat, his glove, and runs outside to meet Grandpa James. They always practice catching and hitting in the backyard. Playing baseball with grandfather is Little Rhino's favorite thing to do, especially when he pretends to be a real Major League homerun hitter.One afternoon, after a long day of second grade, Little Rhino comes home to find out that Grandpa James has signed him up for a baseball league! Little Rhino will finally be a part of a team! But Little Rhino will quickly learn that is not always so easy to a good teammate, especially when there's a bully wearing the same uniform as you.From Major League Baseball superstar Ryan Howard and his wife, Krystle Howard, a former elementary school teacher, this exciting new series is a fun read for sports and book fans alike!

Krystle Howard is a former elementary school teacher with a passion for education and childhood literacy. She graduated West Chester University with a degree in elementary education and a minor in literacy. She was instrumental in developing and implementing "Ryan's Reading Challenge," a program that resulted in more than 1 million minutes of reading by the children involved. She is currently the Chief Operating Officer of the Ryan Howard Big Piece Foundation.
Ryan Howard is a Major League Baseball first baseman for the Philadelphia Phillies. He is a three-time All-Star who won the National League Rookie of the Year award in 2005 and followed that up by winning the National League Most Valuable Player award in 2006. He is extremely active in the community. Together with his wife, Krystle, they co-founded the Ryan Howard Big Piece Foundation which is dedicated to improve the lives of children by promoting academic and athletic development.