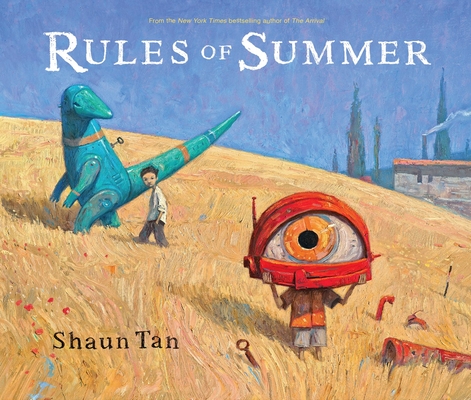 Never be late for a parade.
Never forget the password.
Never ruin a perfect plan.

It's all about the rules. But what if the rules feel completely arbitrary? What if your older brother is the only one who gets to make them up all summer long? And what if he's the only one who can save you when the darkness of winter comes rushing in?

As usual, master artist and storyteller Shaun Tan shows us the strange truth of ordinary things -- rules, relationships, despair, and hope -- as only he can.

Shaun Tan is the New York Times bestselling author of The Arrival, Tales from Outer Suburbia, Tales from the Inner City, Rules of Summer, and The Singing Bones. He received the Astrid Lindgren Memorial Award in 2011 and won an Academy Award for the adaptation of his picture book The Lost Thing (from Lost & Found: Three by Shaun Tan). Shaun lives in Melbourne, Australia.

Praise for Rules of Summer

* "As always, the swirl of emotion that Tan's artwork kicks up lingers long after the book is closed." -- Publishers Weekly, starred review

* "Sumptuous and sincere -- this title is a winner." -- School Library Journal, starred review


Praise for The Arrival

"Mesmerizing... Such visual eloquence can only motivate readers to seek out any future graphic novels from Shaun Tan, regardless of where they might be shelved." -- New York Times Book Review

* "Filled with both subtlety and grandeur, the book is a unique work that not only fulfills but also expands the potential of its form." -- Booklist, starred review


Praise for Tales from Outer Suburbia

* "The thoughtful and engaged reader will take from these stories an experience as deep and profound as with anything he has ever read." -- Booklist, starred review

* "Graphic-novel and text enthusiasts alike will be drawn to this breathtaking combination of words and images." -- Kirkus Reviews, starred review

* "These stories representing the visionary work of a master storyteller, illustrator, and designer who cares deeply about his message deserve a place in almost every collection." -- Booklist, starred review

"Shaun Tan rocks my retinas... The book is gorgeously designed, the stories are evocative and mysterious, and every page of Tan's paintings -- I can't bring myself to call them mere illustrations -- commands long moments of study." -- Cleveland Plain Dealer


Praise for The Bird King: An Artist's Notebook

* "The sharing of unfinished work is a generous gesture, and the collection is a treasure trove for any young artist who wants to know more about how ideas are captured on paper." -- Publishers Weekly, starred review

* "Unmistakable are his flawless craftsmanship, his organically industrial yet timeless aesthetic, and his lyrically haunting style and tone... A powerful springboard for the imagination." -- Booklist, starred review

Publishers Weekly Starred Review
In a book that reads like an homage to The Mysteries of Harris Burdick, Lindgren award-winner Tan (The Arrival) offers a sequence of paintings that represent a boy’s cumulative summer knowledge, framed as rules and populated by Tan’s now-familiar menagerie of one-eyed robots, malevolent rabbits, and windup dinosaurs. The rules appear on the left, while lavish, brilliant paintings of the accompanying disasters light up the opposite pages. An older boy yanks his younger brother away from a platter at a soiree full of glaring raptors (“Never eat the last olive at a party”); frowns when bats, lizards, and sea anemones move into the living room (“Never leave the back door open overnight”); and, after a fistfight, bundles the younger boy into a locomotive and sends him off through Siberian wastes (“Never lose a fight”). At last, the older brother relents and rescues the younger boy (“Always know the way home”); they arrive in a lush, Wayne Thiebaud–style paradise of gigantic fruits and puddings through which they parade with drum and horn. As always, the swirl of emotion that Tan’s artwork kicks up lingers long after the book is closed.

*"The effect is an externalization of the deeply felt emotions of childhood, and it is heightened by the smallness of the single lines of text centered on mostly blank verso pages that feature only accidental scribbles, as if to indicate that so much of what happens can’t be put into words, and words themselves tell less than half the story" -Bulletin of the Center for Children's Books, starred review