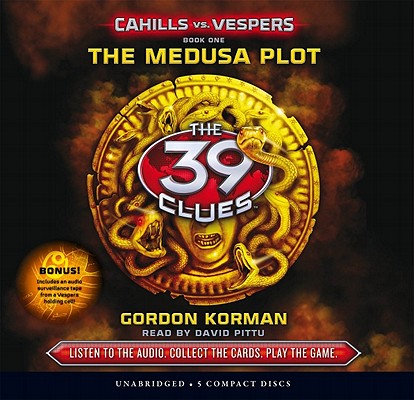 By Gordon Korman, Scholastic Multi-Platform (Created by)
Email or call for price.
Hard to Find

Are you ready to save the world? The bestselling series returns with an adventure spanning 6 explosive books, 2 secret-filled card packs, and a website that places readers right in the action.

Thirteen-year-old Dan Cahill and his older sister, Amy, thought they belonged to the world's most powerful family. They thought the hunt for 39 Clues leading to the source of that power was over. They even thought they'd won. But Amy and Dan were wrong.

One by one, distress calls start coming in from around the globe. Cahills are being kidnapped by a shadowy group known only as the Vespers. Now Amy and Dan have only days to fulfill a bizarre ransom request or their captured friends will start dying. Amy and Dan don't know what the Vespers want or how to stop them. Only one thing is clear. The Vespers are playing to win, and if they get their hands on the Clues . . . the world will be their next hostage.

Gordon Korman is the author of The 39 Clues Book 2: One False Note, which debuted at #1 on the New York Times bestseller list, and The 39 Clues Book #8: The Emperor's Code. Gordon has written more than sixty books for kids and young adults, including Zoobreak, Swindle, and Son of the Mob, as well as the On the Run series and the Island, Everest, Dive, and Kidnapped trilogies. A native of Ontario, Canada, Korman now lives with his family in Long Island, New York.