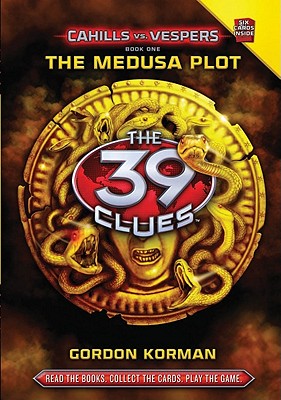 A new enemy. An even deadlier challenge. The bestselling series returns with an adventure spanning 6 explosive books, 2 secret-filled card packs, and a website that places readers right in the action.

The Clue hunt is over, but Amy and Dan Cahill's lives haven't exactly returned to normal. They know that the Cahills' historic rivals-the Vespers-have been waiting for the opportunity to strike. As the new Madrigal leaders, it's up to Amy and Dan to prepare the Cahills for attack, but their efforts aren't enough to stop the Vespers, a mysterious organization that includes some of the world's most dangerous criminals.

In one devastating move, they kidnap a number of Cahills and then send Amy and Dan a strange message. If the kids can steal a famous painting and give it to the Vespers, they'll release one of the hostages.

Suddenly, Amy and Dan find themselves in a new global race but this time, everything's different, Those closest to them might be working for the enemy, and Amy and Dan are forced to ask themselves how far they're willing to go.

Gordon Korman is the author of The 39 Clues Book 2: One False Note, which debuted at #1 on the New York Times bestseller list, and The 39 Clues Book #8: The Emperor's Code. Gordon has written more than sixty books for kids and young adults, including Zoobreak, Swindle, and Son of the Mob, as well as the On the Run series and the Island, Everest, Dive, and Kidnapped trilogies. A native of Ontario, Canada, Korman now lives with his family in Long Island, New York.