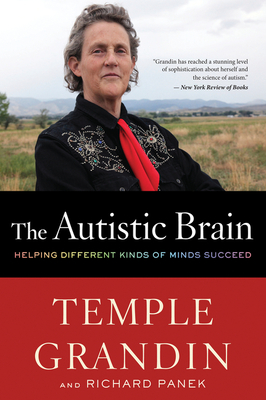 
Ships quickly (1-7 days)
In The Autistic Brain, New York Times bestselling author Temple Grandin "has reached a stunning level of sophistication about herself and the science of autism" (The New York Review of Books).

Winner of a Goodreads Choice Award for Best Nonfiction Book

Temple Grandin may be the most famous person with autism, a condition that affects 1 in 88 children. Since her birth in 1947, our understanding of it has undergone a great transformation, leading to more hope than ever before that we may finally learn the causes of and treatments for autism.

Weaving her own experience with remarkable new discoveries, Grandin introduces the advances in neuroimaging and genetic research that link brain science to behavior, even sharing her own brain scan to show which anomalies might explain common symptoms. Most excitingly, she argues that raising and educating kids on the autism spectrum must focus on their long-overlooked strengths to foster their unique contributions.

The Autistic Brain brings Grandin’s singular perspective into the heart of the autism revolution.

TEMPLE GRANDIN is one of the world’s most accomplished and well-known adults with autism. She is a professor at Colorado State University and the New York Times bestselling author of several books, including The Autistic Brain, which have sold more than a million copies. Named one of Time's most influential people in 2010, the HBO movie based on her life, starring Claire Danes, received seven Emmy Awards.

RICHARD PANEK, a Guggenheim Fellow in science writing, is the author of The 4% Universe: Dark Matter, Dark Energy, and the Race to Discover the Rest of Reality, which won the American Institute of Physics communication award in 2012, and the co-author with Temple Grandin of The Autistic Brain: Thinking Across the Spectrum, a New York Times bestseller. He lives in New York City.

"[Grandin’s] most insightful work to date…The Autistic Brain is something anyone could benefit from reading, and I recommend it to anyone with a personal or professional connection to autism or neurological difference."—John Elder Robison, author of Look Me in the Eye   "In The Autistic Brain, Grandin explains what she's learned in recent years about her brain and the brains of others with autism." -- USA Today   "Grandin has reached a stunning level of sophistication about herself and the science of autism. Her observations will assist not only fellow autistics and families with affected members, but also researchers and physicians seeking to better understand the condition." — Jerome Groopman, The New York Review of Books   "Her visual circuitry extends well beyond where neurotypicals’ circuitry stops. Grandin is wired for long-term visual memory. She is sure that one day, autism will be explained by neurobiology. Her new book, The Autistic Brain, outlines that quest." -- Los Angeles Times   "Grandin has helped us understand autism not just as a phenomenon, but as a different but coherent mode of existence that otherwise confounds us…She excels at finding concrete examples that reveal the perceptual and social limitations of autistic and "neurotypical" people alike." — The New York Times   "Autism is a spectrum, and Temple is on one edge. Living on this edge has allowed her to be an extraordinary source of inspiration for autistic children, their parents—and all people." —Time   "The Autistic Brain can both enlighten readers with little exposure to autism and offer hope and compassion to those who live with the condition." —Scientific American   "The right brain has created the right book for right now." — Pittsburgh Post-Gazette   "An iconic example of someone who puts her strengths, and even her limitations, to good use." — KQED, San Francisco   "Temple Grandin has yet again been of enormous service to the millions of autistic individuals worldwide, to anyone labeled with a disability, and to the rest of us curious about the brain and the intricacies of human experience." — New York Journal of Books   "The Autistic Brain is an engaging look at life within the spectrum. It’s also an honest one." — HealthCare Book Reviews   "A tremendous gift, not just to patients and their families, but also to teachers, mentors, friends, and everyone who is interested in understanding how our brains make us who we are…This is a book everyone should read." — Dr. Ginger Campbell, Brain Science Podcast   "Highly recommended for anyone who knows or works with people on the spectrum." — Library Journal (Starred Review)   "Grandin’s particular skill is her remarkable ability to make sense of autistics’ experiences, enabling readers to see ‘the world through an autistic person’s jumble of neuron misfires,’ and she offers hope that one day, autism will be considered not according to some diagnostic manual, but to the individual." — Publishers Weekly   "An important and ultimately optimistic work." —Booklist   "An illuminating look at how neuroscience opens a window into the mind." —Kirkus —