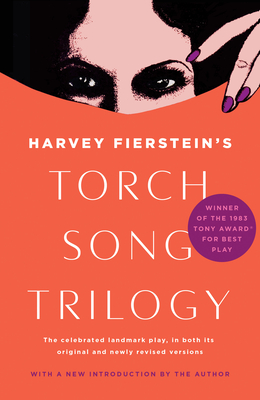 
Ships quickly (1-7 days)
A new edition of the classic drama portraying gay life in New York in the 1970s and 80s—winner of the Tony Award for Best Play, now back on Broadway in a revival hailed by The New York Times as “irresistibly compelling.”

What begins as a chance encounter in a New York nightclub leads drag performer Arnold Beckoff on a hilarious yet touching pursuit of love, happiness, and a life he can be proud of. From a failed affair with a reluctant lover to a committed relationship with the promise of a stable family, Arnold’s struggle for acceptance meets its greatest resistance when he faces off against the person whose approval is most important to him: his mother.

This edition contains for the first time ever both the original scripts for the three one-act plays (The International Stud, Fugue in a Nursery, and Widows and Children First!) as they were performed in the 1970s, as well as the revised script for the 2017 revival that condensed all three into Torch Song. It also includes a never-before-published introduction by Harvey Fierstein, as well as photographs from both the original production and the revival starring Michael Urie and Mercedes Ruehl and directed by Moisés Kaufman.

“Harvey Fierstein has created characters so vivid and real that they linger in the mind, talking the night away, long after the lights have been turned out and everyone has left.”—Time

Harvey Fierstein is the Tony Award-winning author of Torch Song Trilogy and La Cage Aux Folles. His other theater writing includes Kinky Boots (Tony-nominated), Newsies (Tony-nominated), Casa Valentina (Tony-nominated), A Catered Affair (twelve Drama Desk nominations), Safe Sex, Spookhouse, and Legs Diamond, among others. He wrote the teleplays of Hairspray Live! and The Wiz Live!, both for NBC. For HBO he’s written On Tidy Endings (Ace Award), The Sissy Duckling (Humanitas Award), and Common Ground. He’s written political editorials for The New York Times, HuffPost, TV Guide, and PBS, as well as authoring the beloved children’s book The Sissy Duckling. Beginning his acting career in Andy Warhol’s Pork at LaMama, Fierstein is also well-known for his theater performances, including Torch Song Trilogy (Tony Award), Hairspray (Tony Award), Fiddler on the Roof, La Cage Aux Folles, Gently Down the Stream, and A Catered Affair, as well as film performances in Mrs. Doubtfire, Independence Day, and Bullets Over Broadway. TV audiences know him from shows like The Good Wife, Nurse Jackie, and Cheers (Emmy-nominated) and recognize his voice from appearances on BoJack Horseman, Family Guy, The Simpsons, How I Met Your Mother, Mulan, and Sesame Street.
“Harvey Fierstein has created characters so vivid and real that they linger in the mind, talking the night away, long after the lights have been turned out and everyone has left.”—Time