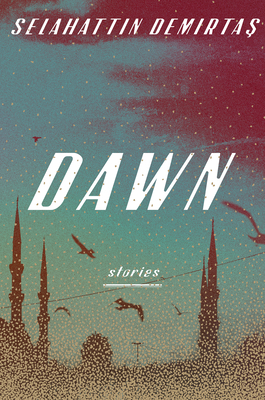 A new book from Sarah Jessica Parker’s imprint, SJP for Hogarth: Written from behind bars, the unforgettable collection from one of Turkey’s leading politicians and most powerful storytellers.

In this essential collection, Selahattin Demirtaş’s arresting stories capture the voices of ordinary people living through extraordinary times. A cleaning lady is caught up in a violent demonstration on her way to work. A five-year-old girl attempts to escape war-torn Syria with her mother by boat. A suicide bombing shatters a neighborhood in Aleppo. And in the powerful story, 'Seher', a young factory worker is robbed of her dreams in an unimaginable act of violence.

Written with Demirtas’s signature wit, warmth, and humor, and alive with the rhythms of everyday speech, DAWN paints a remarkable portrait of life behind the headlines in Turkey and the Middle East – in all its hardship and adversity, freedom and hope.

Born in 1973, Selahattin Demirtaş is a Zaza-Kurdish politician and former co-leader of the Peoples’ Democratic Party (HDP) in Turkey. He began his political career as a human rights lawyer, and helped transform the HDP into a more inclusive party with an emphasis on progressive values, feminism, and LGBTQ rights. He passionately believes in the liberal, democratic future of Turkey. Imprisoned since November 2016, Demirtaş ran for president in 2014, and again in 2018 – where he conducted his campaign from his prison cell. Written from a maximum-security prison in Edirne, where he is still being held, Dawn is his first work of fiction

"Imprisoned Kurdish lawyer and progressive politician Demirtaş delivers a closely observed series of portraits of lives oppressed… A welcome debut collection. One hopes for more—and that Demirtaş will not be silenced by his captors." — Kirkus

“Selahattin Demirtas’ short stories are beautiful and full of surprises, especially in their bold portrayal of women. A new addition to Turkey’s tragic canon of literature written in prison.” — Jennifer Clement, author of Gun Love and President of PEN International

“Selahattin Demirtas is Turkey's most famous political prisoner. He is also that rarest of beasts, a liberal, a democrat and a feminist in a part of the world that is more frequently associated with coercion and intimidation. By turns playful, didactic and full of love for his native Kurdistan, Dawn is a ray of light in the penumbra of today's Middle East.” — Christopher de Bellaigue, author of The Islamic Enlightenment

"Marvelous and deeply affecting, the imprisoned politician Selahattin Demirtas brings to life the great heart and spirit of ordinary Kurdish people. His stories are horrific yet hopeful, heart-wrenching yet humorous, and offer much-needed insight into what everyday life is like in twenty-first-century Turkey." — Christiane Bird, author of A Thousand Sighs, A Thousand Revolts: Journeys in Kurdistan