Mao's War Against Nature: Politics and the Environment in Revolutionary China (Studies in Environment and History) (Paperback) 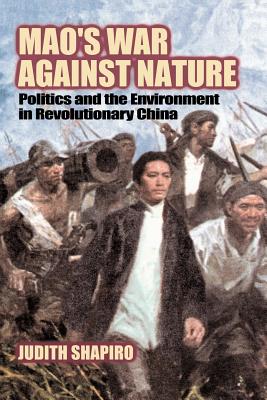 By Judith Shapiro
$33.99
Not on our shelves at the moment, but we will order it for you.
(This book cannot be returned.)

In clear and compelling prose, Judith Shapiro relates the great, untold story of the devastating impact of Chinese politics on China's environment during the Mao years. Maoist China provides an example of extreme human interference in the natural world in an era in which human relationships were also unusually distorted. Under Mao, the traditional Chinese ideal of "harmony between heaven and humans" was abrogated in favor of Mao's insistence that "Man Must Conquer Nature." Mao and the Chinese Communist Party's "war" to bend the physical world to human will often had disastrous consequences both for human beings and the natural environment. Mao's War Against Nature argues that the abuse of people and the abuse of nature are often linked. Shapiro's account, told in part through the voices of average Chinese citizens and officials who lived through and participated in some of the destructive campaigns, is both eye-opening and heartbreaking. Judith Shapiro teaches environmental politics at American University in Washington, DC. She is co-author, with Liang Heng, of several well known books on China, including Son of the Revolution (Random House, 1984) and After the Nightmare (Knopf, 1986). She was one of the first Americans to work in China after the normalization of U.S.-China relations in 1979.