Reason, Grace, and Sentiment: Volume 1, Whichcote to Wesley: A Study of the Language of Religion and Ethics in England 1660-1780 (Cambridge Studies in Eighteenth-Century English Literature a #8) (Hardcover) 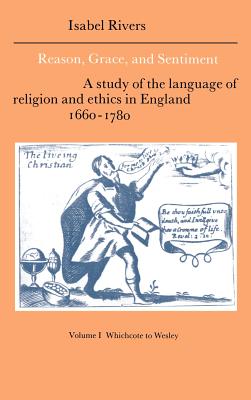 This is book number 8 in the Cambridge Studies in Eighteenth-Century English Literature a series.

The period 1660-1780 saw major changes in the relationship between religion and ethics in English thought. In this first part of an important two-volume study, Isabel Rivers examines the rise of Anglican moral religion and the reactions against it expressed in nonconformity, dissent and methodism. Her study investigates the writings that grew out of these movements, combining a history of the ideas of individual thinkers (including both prominent figures such as Bunyan and Wesley and a range of lesser writers) with analysis of their characteristic terminology, techniques of persuasion, literary forms and styles. The intellectual and social milieu of each movement is explored, together with the assumed audiences for whom the texts were written. The book provides an accessible, wide-ranging and authoritative new interpretation of a crucial period in the development of early modern religious and moral thought.