Just Get on the Pill: The Uneven Burden of Reproductive Politics (Reproductive Justice: A New Vision for the 21st Century #4) (Paperback) 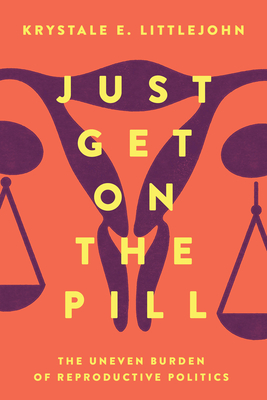 Just Get on the Pill: The Uneven Burden of Reproductive Politics (Reproductive Justice: A New Vision for the 21st Century #4) (Paperback)


On Our Shelves (Note - We update this inventory once per day.)
Understanding the social history and urgent social implications of gendered compulsory birth control, an unbalanced and unjust approach to pregnancy prevention.

The average person concerned about becoming pregnant spends approximately thirty years trying to prevent conception. People largely do so alone using prescription birth control, a situation often taken for granted in the United States as natural and beneficial. In Just Get on the Pill, a keenly researched and incisive examination, Krystale Littlejohn investigates how birth control becomes a fundamentally unbalanced and gendered responsibility. She uncovers how parents, peers, partners, and providers draw on narratives of male and female birth control methods to socialize cisgender women into sex and ultimately into shouldering the burden for preventing pregnancy.

Littlejohn draws on extensive interviews to document this gendered compulsory birth control—a phenomenon in which people who give birth are held accountable for preventing and resolving pregnancies in gender-constrained ways. She shows how this gendered approach encroaches on reproductive autonomy and poses obstacles for preventing disease. While diverse cisgender women are the focus, Littlejohn shows that they are not the only ones harmed by this dynamic. Indeed, gendered approaches to birth control also negatively impact trans, intersex, and gender nonconforming people in overlooked ways. In tracing the divisive politics of pregnancy prevention, Littlejohn demonstrates that the gendered division of labor in birth control is not natural. It is unjust.
Krystale E. Littlejohn is Assistant Professor of Sociology at the University of Oregon. Her work has been published in Demography, Gender & Society, and Journal of Health and Social Behavior, among other outlets.
“‘Contraceptive failures,’ Littlejohn shows, occur for reasons of health, misinformation and finances, yes, but equally because of gendered motives and interactions that aren’t discussed in classrooms or bedrooms.”
— Times Literary Supplement

"Krystale E. Littlejohn shows how birth control hasn't been as empowering as society first hailed it to be, especially for marginalized populations. . . . A powerful read."
— Mashable

"This is a well-researched and much-needed historical and contemporary exploration of the unjust (cis)gendered aspects of birth control, pregnancy and reproductive autonomy."
— Ms. Magazine

"Far from being emancipatory, liberating technologies, this book shows how contraception can be stressful, painful, a bone of contention between sexual partners, and a burden. . . . An important account of the challenges women face in using contraception, the need to pay attention to the specific contexts in which people try to avoid pregnancy and disease, and the problems of gendering birth control."
— Gender, Place and Culture

“Littlejohn provides much food for thought in this short but interesting book on the unintended consequences of the expansion of birth control technology. . . . Engaging and deliberately controversial, this book should prove useful for stimulating debate.”
— CHOICE