Race, Place, and Suburban Policing: Too Close for Comfort (Paperback) 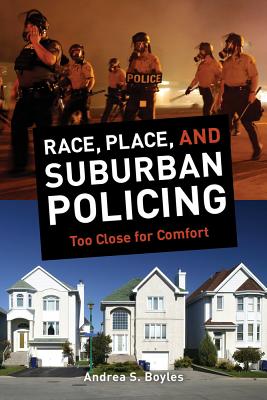 Andrea Boyles does a deep ethnographic study of Meacham Park and Kirkwood, neighborhoods just outside the city of St. Louis. She looks at the history of Meacham Park, an historically Black neighborhood, and how it was annexed into Kirkwood, a mostly White suburb. The annexation took place after some shady dealings and led to half of Meacham Park being demolished and replaced with a shopping center, among other tragedies. There's been a lot of research on urban policing in Black communities, but Boyles was interested in what policing of Black communities looks like in a suburban context. Really insightful and interesting.

While considerable attention has been given to encounters between black citizens and police in urban communities, there have been limited analyses of such encounters in suburban settings. Race, Place, and Suburban Policing tells the full story of social injustice, racialized policing, nationally profiled shootings, and the ambiguousness of black life in a suburban context. Through compelling interviews, participant observation, and field notes from a marginalized black enclave located in a predominately white suburb, Andrea S. Boyles examines a fraught police-citizen interface, where blacks are segregated and yet forced to negotiate overlapping spaces with their more affluent white counterparts.

Andrea S. Boyles is Associate Professor of Criminal Justice at Lindenwood University-Belleville. She has also taught inmates and correctional officers within the Missouri prison system.

"Boyles brings two fresh perspectives to the table of policing literature. First, her focus is on suburbia rather than the more traditional policing milieu of cities. Second, she expands the conversation from the police to the body politic as a whole. This latter novelty is arguably the most important addition Boyles makes to the policing literature."
— Criminal Law and Criminal Justice Books

"Rarely do we scrutinize the persistent inequalities between white and black America at the root of these social problems. It is in this context that Andrea Boyles’ book Race, Place, and Suburban Policing is so timely... informative."
— Contemporary Sociology

"Boyles presents a unique and innovative understanding of the relationship between race, place, and policing."
— Journal of Qualitative Criminal Justice & Criminology