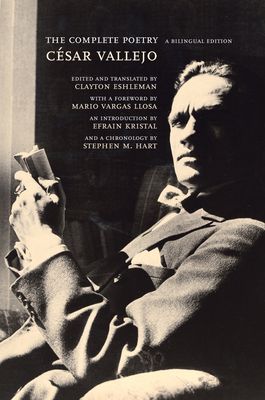 There are poems in life, so powerful... I don't know! When you need to laugh, when you need to cry, when you need a reminder that suffering can be transposed into a song, turn to Vallejo. He is simply the best.
— From Jeff
This first translation of the complete poetry of Peruvian César Vallejo (1892-1938) makes available to English speakers one of the greatest achievements of twentieth-century world poetry. Handsomely presented in facing-page Spanish and English, this volume, translated by National Book Award winner Clayton Eshleman, includes the groundbreaking collections The Black Heralds (1918), Trilce (1922), Human Poems (1939), and Spain, Take This Cup from Me (1939).

Vallejo's poetry takes the Spanish language to an unprecedented level of emotional rawness and stretches its grammatical possibilities. Striking against theology with the very rhetoric of the Christian faith, Vallejo's is a tragic vision—perhaps the only one in the canon of Spanish-language literature—in which salvation and sin are one and the same. This edition includes notes on the translation and a fascinating translation memoir that traces Eshleman's long relationship with Vallejo's poetry. An introduction and chronology provide further insights into Vallejo's life and work.
César Abraham Vallejo Mendoza (1892–1938) was a Peruvian poet, writer, playwright, and journalist. Although he published only three books of poetry during his lifetime, he is considered one of the great poetic innovators of the 20th century in any language.

Poet and essayist Clayton Eshleman is a recipient of the National Book Award and the Landon Translation Prize. He is the cotranslator of César Vallejo: The Complete Posthumous Poetry and Aimé Césaire: The Collected Poetry, both from UC Press. Among Mario Vargas Llosa's prestigious literary awards are the National Critics' Prize, the Peruvian National Prize, and the Miguel de Cervantes Prize. He is the author of more than twenty books. Efrain Kristal is Professor of Comparative Literature at the University of California, Los Angeles. Stephen M. Hart is Professor of Spanish and Latin American Studies at University College, London.

“Conveys, in all its boldness and vigour, the unmistakable voice of Cesar Vallejo.”
— London Review of Books

“Eshleman’s fine translations, produced over forty-three years and presented here alongside the Spanish texts, testify to Vallejo’s innovation—his love of neologism and visual play—and to a poignant, passionate life caught in the maelstrom of Western Europe between the wars.”
— New Yorker

“Decades in the making, this faithful and forceful complete text from poet and essayist Eshleman deserves as much notice as any poetic translation can get.”
— Publishers Weekly

“It’s always exciting when an important literary figure has his work properly presented . . . and now the despairing, politically charged poetry of César Vallejo, who died in 1938, has finally gotten the treatment it deserves. This authoritative, elegant, and sturdy edition presents the Peruvian modernist's complete poems on opposing pages with their translations, which were rendered by Clayton Eshleman, himself a poet of enormous range and sensitivity. They’re destined to become classics.”
— Vulture

“This book is a landmark in the history of modern poetry. To have the complete poems of Peruvian Cesar Vallejo—one of the three most important Spanish-language poets of the past century (Pablo Neruda and Frederico Garcia Lorca being the others)—in one volume changes the course of poetic translation. . . . This huge volume records layers of visionary experiences that defy interpretation, and the result is some of the darkest yet most moving poetry of the 20th century.”
— Bloomsbury Review

“Today he [Vallejo] has a place among the finest of his century's poets. And now we have this spectacular edition of his complete poetry, edited and translated, also spectacularly, by poet Clayton Eshleman. . . . Eshleman has given the world an inestimable gift in bringing all the poems together in such a lucid and fitting translation.”
— Philadelphia Inquirer