What Is the Name of This Book?: The Riddle of Dracula and Other Logical Puzzles (Dover Recreational Math) (Paperback) 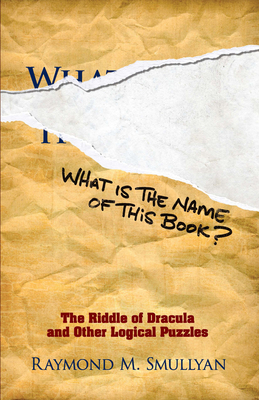 The most original, most profound, and most humorous collection of recreational logic and math problems ever written. -- Martin Gardner, Scientific American
The value of the book lies in the wealth of ingenious puzzles. They afford amusement, vigorous exercise, and instruction. -- Willard Van Orman Quine, The New York Times Book Review
If you're intrigued by puzzles and paradoxes, these 200 mind-bending logic puzzles, riddles, and diversions will thrill you with challenges to your powers of reason and common sense. Raymond M. Smullyan -- a celebrated mathematician, logician, magician, and author -- presents a logical labyrinth of more than 200 increasingly complex problems. The puzzles delve into G del's undecidability theorem and other examples of the deepest paradoxes of logic and set theory. Detailed solutions follow each puzzle.

Raymond Smullyan received his PhD from Princeton University and taught at Dartmouth, Princeton, Indiana University, and New York's Lehman College. Best known for his mathematical and creative logic puzzles and games, he was also a concert pianist and a magician. He wrote over a dozen books of logic puzzles and texts on mathematical logic. Raymond Smullyan: The Merry Prankster Raymond Smullyan (1919-2017), mathematician, logician, magician, creator of extraordinary puzzles, philosopher, pianist, and man of many parts. The first Dover book by Raymond Smullyan was First-Order Logic (1995). Recent years have brought a number of his magical books of logic and math puzzles: The Lady or the Tiger (2009); Satan, Cantor and Infinity (2009); an original, never-before-published collection, King Arthur in Search of His Dog and Other Curious Puzzles (2010); and Set Theory and the Continuum Problem (with Melvin Fitting, also reprinted by Dover in 2010). More will be coming in subsequent years. In the Author's Own Words: Recently, someone asked me if I believed in astrology. He seemed somewhat puzzled when I explained that the reason I don't is that I'm a Gemini. Some people are always critical of vague statements. I tend rather to be critical of precise statements: they are the only ones which can correctly be labeled 'wrong.' -- Raymond Smullyan Critical Acclaim for The Lady or the Tiger: Another scintillating collection of brilliant problems and paradoxes by the most entertaining logician and set theorist who ever lived. -- Martin Gardner