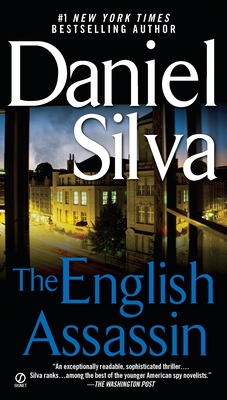 This is book number 2 in the Gabriel Allon series.

An Israeli spy by trade and art restorer by preference, Gabriel Allon arrives in Zurich to restore the work of an Old Master for a millionaire banker—and finds himself standing in blood and framed for the man’s murder.

While trying to clear his name, Allon is swept into a spiraling chain of events involving Nazi art theft, a decades-old suicide, and a dark and bloody trail of killings—some of them his own. The spy world Allon thought he had left behind has come back to haunt him. And he will have to fight for his life—against an assassin he himself helped train.
Daniel Silva is the #1 New York Times bestselling author of The Unlikely Spy, The Mark of the Assassin, The Marching Season, and the Gabriel Allon series, including The Kill Artist, The English Assassin, The Confessor, A Death in Vienna, Prince of Fire, The Messenger, The Secret Servant, Moscow Rules, The Defector, The Rembrandt Affair, Portrait of a Spy, The Fallen Angel, The English Girl, The Heist, The English Spy, The Black Widow, House of Spies, and The Other Woman. His books are published in more than thirty countries and are bestsellers around the world.

“A cloak-and-dagger tale [that] moves at a brisk clip, with clean, lucid exposition and characters who are thoughtfully drawn.”—The New York Times

“The plot is rich, multilayered and compelling with issues as timely as the daily headlines and problems as old as humankind...Silva maintains tension and suspense.”—The Denver Post

“Enthralling...a thriller that entertains as well as enlightens.”—The Orlando Sentinel

“Silva knows how to plot...[he] will draw you in—and you’ll learn something at the same time.”—Rocky Mountain News