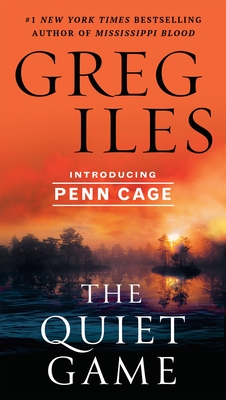 This is book number 1 in the Penn Cage series.

In the aftermath of a personal tragedy, this is where Penn has returned for solitude. This is where he hopes to find peace. What he discovers instead is his own family trapped in a mystery buried for thirty years but never forgotten—the town’s darkest secret, now set to trap and destroy Penn as well.
Greg Iles is the #1 New York Times bestselling author of the Penn Cage series. His novels have been made into films, translated into more than twenty languages, and published in more than thirty-five countries worldwide.

Praise for The Quiet Game

“The pace is frenetic, the fear and paranoia palpable, and the characters heartbreakingly honest. Iles strikes not one false note.”—Cleveland Plain Dealer

“Would make James Lee Burke or even Pat Conroy proud. This is storytelling at its absolute best, a tale of near-epic status.”—Providence Sunday Journal

“The plot turns and twists with surprise after surprise...inventive and satisfying. [Iles’s] mastery of the Southern setting rings with the truth of his own experience.”—New Orleans Times-Picayune

“When the final page of The Quiet Game is turned you feel a pang as when good friends move away.”—Orlando Sentinel