The Geography of Bliss: One Grump's Search for the Happiest Places in the World (Paperback) 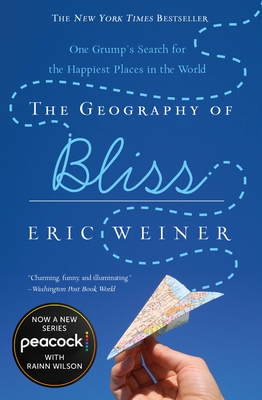 The Geography of Bliss: One Grump's Search for the Happiest Places in the World (Paperback)

“In this marvelous book, curmudgeonly NPR correspondent Weiner takes the reader on a fascinating and informative journey around the world in search of happiness. Weiner treats the reader to his sardonically humorous analysis of both the happiest and, possibly, least happy places on earth. Entertaining and illuminating, this captivating book is sure to provide loads of material for discussions.”
— Tova Beiser, Brown University Bookstore, Providence, RI

Part travel memoir, part humor, and part twisted self-help guide, The Geography of Bliss takes the reader across the globe to investigate not what happiness is, but WHERE it is.

Are people in Switzerland happier because it is the most democratic country in the world? Do citizens of Qatar, awash in petrodollars, find joy in all that cash? Is the King of Bhutan a visionary for his initiative to calculate Gross National Happiness? Why is Asheville, North Carolina so damn happy?

In a unique mix of travel, psychology, science and humor, Eric Weiner answers those questions and many others, offering travelers of all moods some interesting new ideas for sunnier destinations and dispositions.

Eric Weiner is author of the New York Times bestseller The Geography of Bliss, which has been translated into eighteen languages. A former correspondent for NPR and the New York Times, Weiner has reported from more than three dozen countries. His work has appeared in the New Republic, Slate, Los Angeles Times, Washington Post, Foreign Policy, the New York Times Magazine, and the anthology, Best American Travel Writing. He divides his time between Starbucks and Caribou.

Read more about Eric Weiner at www.ericweinerbooks.com.
"With one single book, Eric Weiner has flushed Bill Bryson down a proverbial toilet, and I say that lovingly. By turns hilarious and profound, this is the kind of book that could change your life. The relationship between place and contentment is an ineffable one, and Weiner cuts through the fog with a big, powerful light. The Geography of Bliss is no smiley-face emoticon, it's a Winslow Homer."
—Henry Alford, author of Municipal Bondage and Big Kiss

"Laugh. Think. Repeat. Repeatedly. If someone told me this book was this good, I wouldn't have believed them."—Po Bronson, author of What Should I Do With My Life?

"Think Don Quixote with a dark sense of humor and a taste for hashish and you begin to grasp Eric Weiner, the modern knight-errant of this mad, sad, wise, and witty quest across four continents. I won't spoil the fun by telling if his mission succeeds, except to say that happiness is reading a book as entertaining as this."—Tony Horwitz, author of Confederates in the Attic