Lives of the Monster Dogs (Paperback) 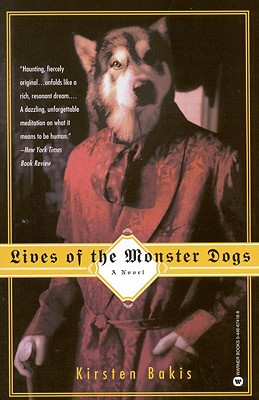 "Lives of The Monster Dogs" is a Featured Alternate Selection of The Book-of-the-Month Club "RM" and The Quality Paperback Book Club "RM", and Audio Literature will be releasing an audio version of this title.

A group of elegant "monster dogs" in top hats, tails, and bustle skirts become instant celebrities when they come to New York in 2008. Refugees from a town which had been completely isolated for 100 years, the dogs retain the 19th century Germanic culture of the humans who created them. As the dogs struggle to adapt to their new surroundings, a young woman befriends them...and discovers that a strange, incurable illness threatens them with extinction.

"An effective fantasy in the tradition of Robert Louis Stevenson and Mary Shelley. It is loaded with metaphor and reflection -- on nature and culture, on science, on the place of artists in society". -- The Wall Street Journal

"One of the most unique and unusual works of fiction to come along in many years....Like Frankenstein before it, Monster Dogs is a fabulous fable well told". -- Cathy Hainer, USA Today