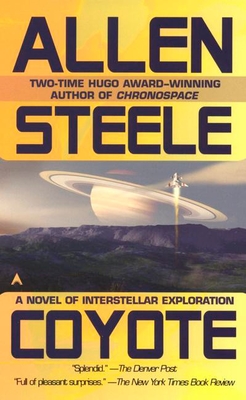 This is book number 1 in the Coyote Trilogy series.

Interstellar colonization is a mainstay of science fiction. Allen Steele gives us a saga that begins with a theft and continues through to humankind stepping onto the galactic stage. Well-thought-out and meticulously constructed, the Coyote stories are memorable.

— From Mark
Coyote marks a dramatic new turn in the career of Allen Steele, Hugo Award-winning author of Chronospace. Epic in scope, passionate in its conviction, and set against a backdrop of plausible events, it tells the brilliant story of Earth’s first interstellar colonists—and the mysterious planet that becomes their home…
Allen Steele was a journalist who covered the space program. He later turned to fiction writing, and his first novel, Orbital Decay, published by Ace Books, was chosen as the best first novel of the year by Locus. Allen himself went on to be nominated for the John W. Campbell Award for Best New Writer. He began writing and selling to the science fiction magazines and is a three-time Hugo Award winner for his short fiction. In 2013, he received the Robert A. Heinlein Award for outstanding published works in science fiction.

“One of the best space-exploration novels in recent memory.”—Rocky Mountain News

“An homage to wonder, hope and determination…Steele has constructed this glorious tale of a new starflung Mayflower from the legacies of Heinlein, Twain, Hemingway and others—and he has founded it on the essence of America.”—Stephen Baxter