We hosted an event with this author
6 years 9 months ago
Check here for a signed copy or email us at info@left-bank.com.

The Three Little Pigs and the Somewhat Bad Wolf (Hardcover) 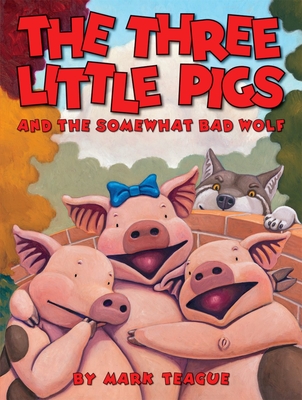 Three pigs spend their money on different things: potato chips, sody-pop, and building supplies. It comes as no surprise that a wolf is able to blow down the first two pigs' houses. When the wolf can't blow down the third pig's brick house, everyone comes together and the fun begins. The first two pigs give him potato chips and sody-pop, and the third pig makes everyone a healthy meal. Since only one pig has a house left, the other two pigs and the wolf move in with her. The somewhat bad wolf is no longer hungry.

Mark Teague is the internationally bestselling illustrator (and author) of more than 50 books for children. His numerous awards and honors include the Book Sense Book of the Year Award and the Christopher Medal. He has illustrated 12 full-size books and 11 board books in the widely successful How Do Dinosaurs...? series. He is the author of the popular Dear Mrs. LaRue, Firehouse!, and Jack and the Beanstalk and the French Fries. He lives in New York State.

HOW DO DINOSAURS SAY GOOD NIGHT? by Jane Yolen and illustrated by Mark Teague
"A delight from start to finish; better buy more than one." --BOOKLIST
ALA Notable Book
SCHOOL LIBRARY JOURNAL Best Book of the Year
NEW YORK TIMES, PUBLISHERS WEEKLY, and BOOK SENSE bestseller

PIGSTY by Mark Teague
Teague "is once again right on target ... with his idiosyncratic brand of sly humor." --PUBLISHERS WEEKLY
SCHOOL LIBRARY JOURNAL Best Book of the Year