The Shape of Desire (A Shifting Circle Novel #1) (Mass Market) 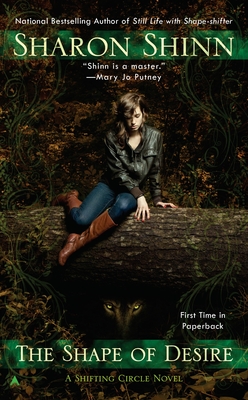 By Sharon Shinn
Email or call for price
Backordered

This is book number 1 in the A Shifting Circle Novel series.

ONE OF PUBLISHERS WEEKLY'S BEST BOOKS OF THE YEAR

Master storyteller Sharon Shinn has thrilled readers with her national bestselling Twelve Houses series. Now experience her original new novel in which love and loyalty are tested at every turn....

For fifteen years, Maria Devane has been desperately, passionately in love with Dante Romano. But Maria knows that Dante can never give everything of himself back—at least not all of the time. Every month, Dante shifts shape, becoming a wild animal. He can’t choose when he shifts, the transition is often abrupt, and, as he gets older, the time he spends in human form is gradually decreasing.

Maria has kept his secret since the beginning, knowing that their love is worth the danger. But when a string of brutal attacks occurs in local parks while Dante is in animal form, Maria is forced to consider whether the lies she’s been telling about her life have turned into lies she’s telling herself...

Sharon Shinn is a journalist who works for a trade magazine. Her first novel, The Shape-Changer’s Wife, was selected by Locus as Best First Fantasy Novel of 1995. She has won the William L. Crawford Award for Outstanding New Fantasy Writer, and was twice nominated for the John W. Campbell Award for Best New Writer. She has also received a RT Reviewers’ Choice Award and won the 2010 RT Book Reviews Career Achievement Award in the Science Fiction/Fantasy category. A graduate of Northwestern University, she has lived in the Midwest for most of her life.

“The tale…meanders like a stream, with strong characterizations and poetic prose polishing the story until it shines.”—Publishers Weekly (starred review)