Confessions of the Fox: A Novel (Hardcover) 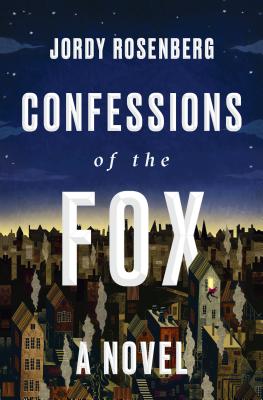 By Jordy Rosenberg
This book might be hard to find. Ask a bookseller for more information.
Hard to Find

Part 18th-century swashbuckling adventure romp, part meta-textual campus novel. In Confessions of the Fox, Jordy Rosenberg offers a new version of an old story in this ambitious, bawdy tale. Jack Sheppard was known in the 1700s as an infamous thief and jailbreaker, or, to London common folk, as a beloved celebrity rogue. Confessions of the Fox revisits this legend with a gender-bending twist, which feels plausible, resonant, and true. This novel offers an alternative history that celebrates the self-discovery, love, and acts of resistance of a transgender man who flies in the face of early capitalism and corruption.

A New York Times Editors’ Choice: “A mind-bending romp through a gender-fluid, eighteenth century London . . . a joyous mash-up of literary genres shot through with queer theory and awash in sex, crime, and revolution.”

NAMED ONE OF THE BEST BOOKS OF THE YEAR BY The New Yorker • HuffPost • Kirkus Reviews • Finalist for the Lambda Literary Award • Shortlisted for the Center for Fiction First Novel Prize • “A dazzling tale of queer romance and resistance.”—Time

Jack Sheppard and Edgeworth Bess were the most notorious thieves, jailbreakers, and lovers of eighteenth-century London. Yet no one knows the true story; their confessions have never been found.

Until now. Reeling from heartbreak, a scholar named Dr. Voth discovers a long-lost manuscript—a gender-defying exposé of Jack and Bess’s adventures. Is Confessions of the Fox an authentic autobiography or a hoax? As Dr. Voth is drawn deeper into Jack and Bess’s tale of underworld resistance and gender transformation, it becomes clear that their fates are intertwined—and only a miracle will save them all.

Writing with the narrative mastery of Sarah Waters and the playful imagination of Nabokov, Jordy Rosenberg is an audacious storyteller of extraordinary talent.

Praise for Confessions of the Fox

“A cunning metafiction of vulpine versatility . . . an action-adventure tale with postmodern flourishes; an academic comedy spliced with period erotica; an intimate meditation on belonging.”—Katy Waldman, The New Yorker

“Confessions of the Fox is so goddamned good. Reading it was like an out-of-body experience. I want to run through the streets screaming about it. It should be in the personal canon of every queer and non-cis person. Read it.”—Carmen Maria Machado, National Book Award finalist for Her Body and Other Parties

“A hat tip to Moby-Dick . . . a running footnote hall of mirrors to rival Borges . . . one of the most trenchant calls for progressive action that I have read in a very long time.”—The New York Times Book Review

Jordy Rosenberg is a transgender writer and scholar. He is an associate professor at the University of Massachusetts Amherst, where he teaches eighteenth-century literature and gender and sexuality studies. He has received fellowships and awards from the Marion and Jasper Whiting Foundation, the Ahmanson Foundation/J. Paul Getty Trust, the UCLA Center for 17th- and 18th-Century Studies, the Society for the Humanities at Cornell University, and the Clarion Foundation’s Science Fiction and Fantasy Writers’ Workshop. He is the author of a scholarly monograph, Critical Enthusiasm: Capital Accumulation and the Transformation of Religious Passion. He lives in New York City and Northampton, Massachusetts. Confessions of the Fox is his first novel.

“A dazzling tale of queer romance and resistance against the hegemonic forces of eighteenth-century London . . . Delightfully subversive.”—Time

“A mind-bending romp through a gender-fluid eighteenth-century London . . . at once very funny and very fierce.—The New York Times (Editors’ Choice)

“A cunning metafiction of vulpine versatility . . . Confessions is an action-adventure tale with postmodern flourishes; an academic comedy . . . an intimate meditation on belonging that doubles as a political proof.”—The New Yorker

“Confessions of the Fox is so goddamned good. Reading it was like an out-of-body experience. I want to run through the streets screaming about it. It should be in the personal canon of every queer and non-cis person. Read it.”—Carmen Maria Machado

“A hat tip to Moby-Dick . . . a running footnote hall of mirrors to rival Borges . . . one of the most trenchant calls for progressive action that I have read in a very long time.”—The New York Times Book Review

“An ambitious, thought-provoking novel [that] explores everything from gender identity to mass incarceration, moves between centuries, and even features footnotes. . . . You’ll find yourself immersed, and maybe even changed.”—Entertainment Weekly

“Resonant of George Saunders, of Nikolai Gogol, and of nothing that’s ever been written before . . . irreverent, erudite, and not to be missed.”—Booklist (starred review)

“Confessions of the Fox is an ambitious debut, and its exploration of this ‘impossible, ghostly archaeology’ will have you looking askance at tidy histories—which feels like just what Jack and Bess would want.”—NPR

“It’s a rich immensely dirty detailed account of a trans person living in eighteenth-century London. Such a good read, so palpable and fantastic, dizzying and compulsively readable . . . Love!"—Eileen Myles, BuzzFeed

“It’s a rollicking yarn with a thread of tender first love, a page-turning tale of eighteenth-century devilry.”—HuffPost

“This novel’s marvelous ambition: To show how easily marginalized voices are erased from our histories—and that restoring those voices is a disruptive project of devotion. A singular, daring, and thrilling novel: political, sexy, and cunning as a fox.”—Kirkus Reviews (starred review)

“A riotous and transporting novel . . . Jordy Rosenberg is a total original—part scamp, part genius—who has written a rich and rollicking page-turner of a first novel.”—Maggie Nelson, author of The Argonauts

“Beauty and violence go together; and what it is to live and practice that entanglement, under the duress of the cops in our streets and in our heads, is what Confessions of the Fox shows with lively, sexy brilliance.”—Fred Moten, author of Black and Blur