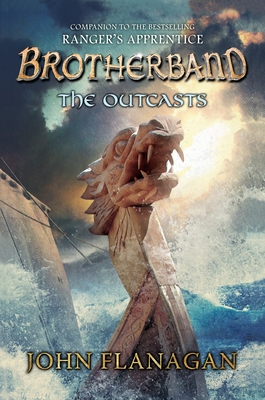 From the author of the global phenomenon Ranger's Apprentice!

They are outcasts. Hal, Stig, and the others - they are the boys the others want no part of. Skandians, as any reader of Ranger's Apprentice could tell you, are known for their size and strength. Not these boys. Yet that doesn't mean they don't have skills. And courage - which they will need every ounce of to do battle at sea against the other bands, the Wolves and the Sharks, in the ultimate race. The icy waters make for a treacherous playing field . . . especially when not everyone thinks of it as playing. John Flanagan, author of the international phenomenon Ranger's Apprentice, creates a new cast of characters to populate his world of Skandians and Araluens, a world millions of young readers around the world have come to know and admire. Full of seafaring adventures and epic battles, Book 1 of The Brotherband Chronicles is sure to thrill readers of Ranger's Apprentice while enticing a whole new generation just now discovering the books.

Perfect for fans of J.R.R. Tolkien’s Lord of the Rings, T.H. White’s The Sword in the Stone, Christopher Paolini’s Eragon series, and George R. R. Martin’s Game of Thrones/A Song of Ice and Fire series.

John Flanagan grew up in Sydney, Australia, hoping to be a writer. John began writing Ranger’s Apprentice for his son, Michael, ten years ago, and is still hard at work on the series and its spinoff, Brotherband Chronicles. He currently lives in the suburb of Manly, Australia, with his wife. In addition to their son, they have two grown daughters and four grandsons.