Surprises According to Humphrey (Hardcover) 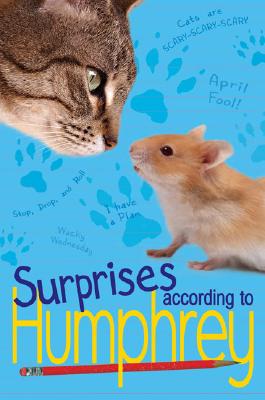 This is book number 4 in the Humphrey series.

Being a classroom hamster means having to be ready for anything?but suddenly there are a lot of big surprises in Humphrey?s world. Some are exciting, like seeing the playground during a fire drill and getting to roll around in a hamster ball. But some aren?t so good, like a cat creeping around, a different janitor who might be from another planet, and the most shocking thing of all?the possibility of Mrs. Brisbane retiring.

Even with all that?s going on, Humphrey makes time to help a few classmates with their problems. But could Mrs. Brisbane leaving school be one problem that?s just too big for this little guy to solve?