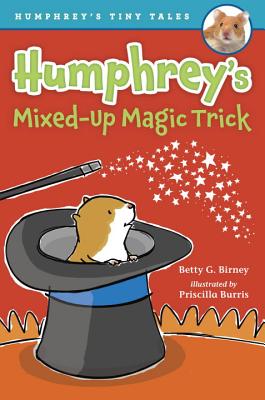 Humphrey might be the first classroom hamster ever to be part of a magic act in this fifth book in the popular chapter book series!

The kids in Room 26 are talking about jobs they want to have when they grow up. Golden-Miranda wants to be a magician and, even more exciting, she wants Humphrey to be her assistant when she shows the class some tricks.

But when one of her tricks is in trouble, can Humphrey’s quick thinking (and scampering) fix it in time?

With sweet illustrations and an easy reading level, Humphrey’s Tiny Tales are hamster-iffic for emerging readers.

Betty G. Birney has won many awards for writing for television, including an Emmy, three Humanitas Prizes, and a Writers Guild of America Award, and she won the Christopher Award for Friendship According to Humphrey. In addition to the Humphrey series, she is the author of The Seven Wonders of Sassafrass Springs and The Princess and the Peabody's. She grew up in St. Louis, Missouri, where her parents grew up as neighbors on Humphrey Street.

"Birney has created the kind of series that first- and second-grade readers will love. It’s set in school, the vocabulary is accessible, the font and spacing are generous, and the frequent illustrations tie the story together. New readers will be 'HAPPY-HAPPY-HAPPY' to see this promising new series."--Kirkus Reviews on Humphrey's Really Wheely Racing Day

"This title has the same characters, humorous action, and gentle tone of the original, but the large print, short chapters, and numerous cartoon-style illustrations make this one suitable for readers new to chapter books."--School Library Journal on Humphrey's Really Wheely Racing Day