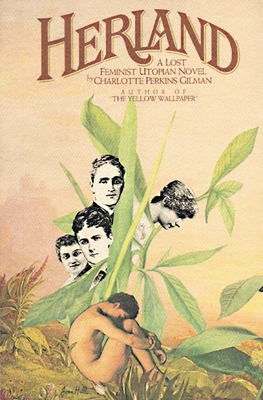 On the eve of World War I, an all-female society is discovered somewhere in the distant reaches of the earth by three male explorers who are now forced to re-examine their assumptions about women's roles in society.

CHARLOTTE PERKINS GILMAN (1860-1935), humanist, wrote books of history, anthropology, ethics, and philosophy, as well as poetry, novels, satire, and social commentary. She devoted her life to lecturing and writing in order to persuade a vast audience of the feasibility of her feminist-socialist vision.

“Herland is utopia with a smile, a gently, witty version of what women can be. As fascinating to women for what it omits entirely as for what it discovers and invents for us, it is a fast and invigorating read. Herland’s real power now, as when it was published over sixty years ago, lies in its openness to what can still happen to us. Probably the most exciting portrayal is the strength of motherhood divorced from the nuclear family.” —Marge Piercy

“Cheers to Ann Lane for rescuing this delightful fantasy from obscurity. Gilman not only presents a charming/rational vision, but she exposes the absurdities of sexism in a way that still stings after half a century. If the utopias a society produced are any index of its ills, then Herland nails our own.” —Alix Kates Shulman

“Herland is pure delight. Those who know “The Yellow Wallpaper” but little else of Gilman’s life will be thrilled. What a serendipitous discovery!” —Susan Brownmiller

“It’s delightful to have Herland out in book form at last (after a sixty-five-year wait)! It’s a lovely, funny book. There is a wonderful flavor of Golden Age science fiction, which adds to the fun and doesn’t in the least spoil the argument, which is still fresh and very much of today.” —Joanna Russ

“Herland has always been the most endearing of utopian fantasies. It has also been, like that exploration of equality between the sexes that it projected, unavailable to the general reader. It is a joy to have it now in print. Generations of young women and men will be happier for the reading—and perhaps acting out—of some of its scenes.” —Eve Merriam

“An astonishingly readable proto-Ectopian novel, presaging themes of resurgent matriarchy that are getting much attention these days—a good-humored and thought-provoking look at what a literally Amazonian society might be like if no members of ‘the violent sex’ had been around for 2,000 years.” —Ernest Callenbach

“In Herland, Charlotte Perkins Gilman leaves the brooding spirit of “The Yellow Wallpaper” behind and gives us a robust vision of a feminist utopia—merrily exposing and exploding the conventions of patriarchy all along the way.” —Pamela Daniels